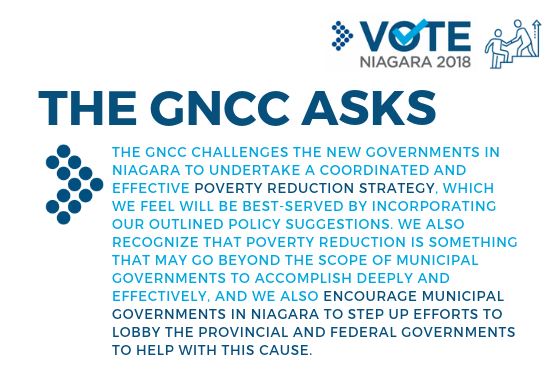 Poverty in Niagara is more than a human tragedy; it actively holds the development and prosperity of our region back. If we are to move forward as a community and to enjoy growth and prosperity, we must take steps to reduce the burden of poverty and to lift up the least fortunate in our community. Increased economic development will reduce poverty, but reduced poverty will also increase economic development as Niagara becomes a place that can attract top investors, talent, and companies.

The Niagara Community Observatory (NCO) calculated that poverty costs Niagara $795 million in lost productivity, $94 million in healthcare, $51 million in crime, $322 million in employment insurance, $115 million to Ontario Works, and $2 million for housing, hostels, and homelessness, for a total cost of $1.38 billion every year. The NCO believes that this estimate, made in 2012, is almost certainly conservative and is more likely to be higher now than it was then given trends in, for example, affordable housing availability and food bank usage. The social costs alone, if freed up, would be enough to build a new hospital every two years, or 1,200 new houses, or to buy 648 buses.

The charitable and non-profit members of the GNCC are, alarmingly, reporting increased use of their services and increased challenges facing their clients. We challenge the new governments in Niagara and the candidates seeking to be a part of them to undertake a coordinated and effective poverty reduction strategy, which we feel will be best-served by incorporating the policy suggestions below. We also recognize that poverty reduction is something that may go beyond the scope of municipal governments to accomplish deeply and effectively, and we also encourage municipal governments in Niagara to ste up efforts to lobby the provincial and federal governments to help with this cause.

Poverty cannot be boiled down to a single problem or to a series of isolated problems. Poverty involves many different and interconnected factors such as employment, housing, crime, health, mental health and addiction. A poverty reduction strategy in Niagara must take an “umbrella” approach that aims at treating all of these problems, and more, as the web of interconnected issues that they are. Furthermore, poverty in Niagara does not affect one municipality, and the effects of poverty in one place spill over into others. The umbrella approach must not only be towards problems, but also towards geography, taking Niagara as a whole and directing resources where they may be best-utilized and most-needed.

Taking government transfers as a percentage of total adult income and the median amount of government transfers from the 2016 Census as a rough proxy for poverty and dependence on the state for income, poverty is shown to be a problem that does not affect all of Niagara equally. These figures vary enormously between municipalities, and between neighbourhoods within them. Efforts to tackle poverty must therefore also be unequal, with resources spent where they are most needed. This is the most efficient and effective way to tackle the problem, and it is why we advocate a single poverty reduction strategy. This must be implemented and coordinated at the regional level, with all thirteen municipal governments acting in cooperation, not competition. To allow this, municipal governments should create a unified strategy for poverty reduction efforts in Niagara, and adopt a philosophy that resources will be allocated where they will be most effective and where they are most needed.

Niagara’s stock of available housing, particularly affordable housing, is at crisis levels. The total supply of rental units has remained stagnant since 2011, increasing by only 167 units, or 1%, around a quarter of the rate of population increase. The supply of bachelor and 1-bedroom units is actually now less than it was in 2011, and the Niagara CMA has one of the worst vacancy rates in Canada.

This dearth of affordable housing is creating socioeconomic problems for Niagara. This is the housing for Niagara’s workforce and our consumer base, a base that is being increasingly squeezed by rising rents and declining availability. Any attempt at reducing poverty and building Niagara’s wealth and prosperity must include a plan to address the affordable housing crisis.

The GNCC believes that the housing crisis is, at the root, caused by supply that is not keeping up with population growth and demand for safe, affordable housing, and that any policy solution will fail if it does not have an increase in the supply of affordable housing as a key goal. At the municipal level, we suggest the following policy tools will be valuable to Niagara’s future governments:

Conduct primary research into rental and vacancy rates by neighbourhood in Niagara to gain an accurate assessment of the problem.

Incent the repurposing of disused or under-used multi-unit and mass-occupancy buildings for affordable housing by way of rebates, tax waivers, renovation credits, and other financial tools.

Niagara’s youth are disadvantaged in the labour market, with higher unemployment rates and lower labour market participation than adults aged over 24, even accounting for the student body. In 2017, Niagara’s general unemployment rate was 6.5%. For Niagara residents aged 15-24 in the workforce (not including, for example, those in education), it was 12.3%. This is not a problem Niagara faces alone; in fact, it is commonly seen across Canada. However, the region that solves the problem of youth unemployment first and best will enjoy a massive competitive advantage for its economy and for the wellbeing of its residents.

Niagara has seen higher job growth in part-time work, while full-time work has diminished over time. This is at least partly caused by external factors such as the 2008 recession, which can clearly be seen in a spike in part-time hiring that has never truly been reduced since. Nevertheless, to reduce poverty and increase opportunity, Niagara’s economic development strategy must focus not on attracting jobs per
se, but good jobs, and bringing those employers to Niagara who will offer full-time, permanent, well-paid work, and who are willing to hire and train youth.

Almost half of businesses expect expenses to increase in next 3 months, Regional Council reappoints Jim Bradley to Regional Chair,… more »