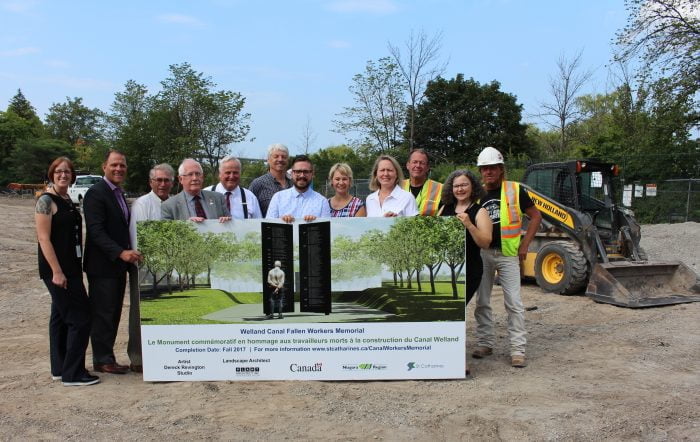 A memorial to commemorate the 137 workers who lost their lives during the construction of the Welland Canal is one step closer to completion.

The Museum will remain open throughout construction, as will the main parking lot south of the museum. However the trail leading to the playground beside the St. Catharines Museum will be closed for the duration of the project. Work will be completed in late fall.

“As we mark Labour Day this weekend, it is an opportunity to reflect on the sacrifice and courage of the 137 workers who lost their lives building the Welland Canal,” said Mayor Walter Sendzik. “The canal has played and will continue to play an important role in the history of St. Catharines and Niagara. Thank you to everyone in the community who has come forward to support this project.”

Led by the Welland Canal Fallen Workers Memorial Task Force, the memorial will feature four elements – the Gates of Remembrance, the Veil, the Timeline and the Lock – all set within a contemplative grove. The memorial was designed by Dereck Revington Studio Inc. The design can be viewed at www.stcatharines.ca/CanalWorkersMemorial.

The Welland Canal Fallen Workers Memorial Task Force has been working to fundraise and build the memorial since 2013. The budget for the memorial and parkette is $1.2 million. The memorial will be built with the support of the Department of Canadian Heritage, the Niagara Region Waterfront Investment Program, the City of St. Catharines and significant donations from the marine industry, local businesses and the labour community. Members of the community can still contribute to the memorial by visiting www.stcatharines.ca/donate.