After seven long years with interest rates at zero, the U.S. Federal Reserve will almost certainly raise rates by 0.25% at its next meeting on December 15.

It has been warning about a coming rate hike since 2013. In the last Fed statement, it changed the wording it has used for years about “In determining how long to maintain this target range…” to “In determining whether to raise the target range at the next meeting…” In the obscure language of Fedspeak, this is like waving your arms and hollering. The signal is intended to warn investors and avoid big market gyrations caused by a surprise.

Except, it will still be a surprise and markets will be shocked. Economists have been warning for five years that the economy would recover and rate hikes would be right around the corner. Each time, the date has been pushed back. Like the boy who cried wolf, markets don’t believe the warnings anymore. Expect big swings in stock markets and emerging market currencies.

What does it mean for business? Rates will rise because the U.S. economy is doing so well that the Fed has little choice but to act. U.S. GDP growth should come in around 2.8% this year and 3.3% in 2016; unemployment is down to 5% and wages are picking up. Since there is usually a 12-18 month lag before a change in interest rates starts to impact the real economy, the Fed has to act now if it wants to stop inflation from overheating a year from now.

A stronger U.S. economy is good for the global economy and it’s definitely good for Canadian business. Canada’s manufactured exports are booming. Auto exports are up 14% this year; communications technology rose 13% and aerospace sales have soared a staggering 29%. This growth is expected to continue next year: Export Development Canada is forecasting a healthy 7% rise in Canadian exports in 2016.

For the Canadian dollar, the Fed’s move means more downward pressure. Investors expect rate hikes to continue in the U.S. in 2016. This is in stark contrast to Canada, which has only just emerged from recession. Canadian inflation is low; consumers aren’t spending and our real estate market is showing worrying signs of overvaluation. There is no need to raise rates any time soon.

All this means that investors will be exiting Canadian securities in favour of U.S. bonds where returns are rising.The markets are betting that the Canadian dollar will fall further. The graph below shows the surge in futures and options shorting the loonie (betting it will decline) on the Chicago Mercantile Exchange. 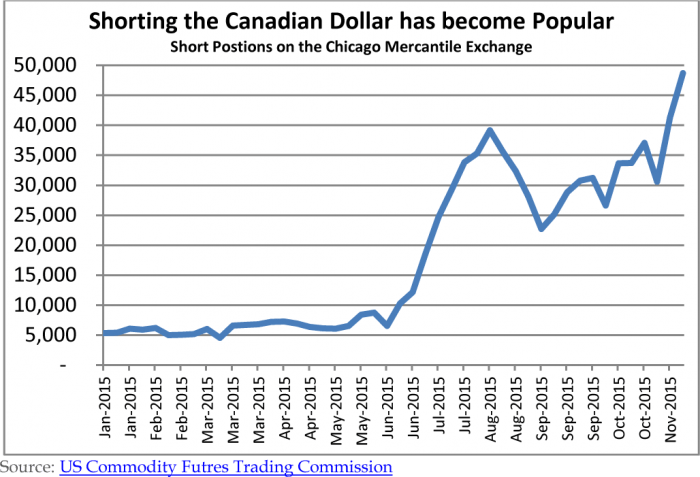 The Canadian Chamber is expecting the loonie to head lower next year, averaging 73 cents in 2016. Good news for many exporters,but bad news if you’re planning a trip to the U.S.