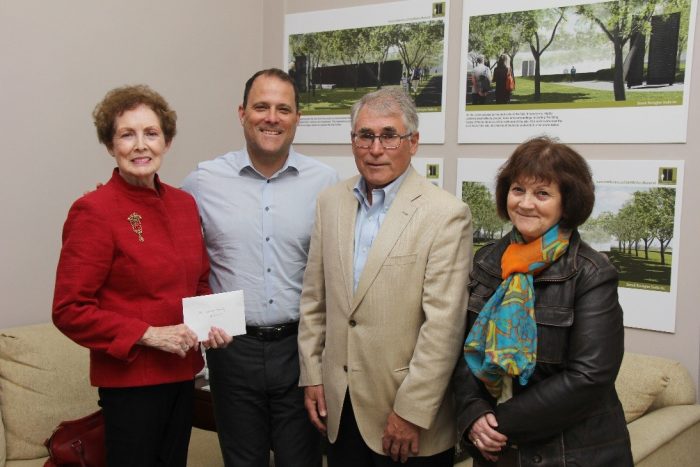 Karen Hunt and Carol Reid, relatives of father and son Elzear and Leo Lynch who died on the same day in 1925 while building the Welland Canal make a donation to the Welland Canal Fallen Workers Memorial to Mayor Walter Sendzik and campaign chair Greg Wight on behalf of the Lynch family.

After fundraising more than $700,000 to date, the Welland Canal Fallen Workers Memorial Task Force is seeking support from the community to complete the project and install the memorial later this year.

Mayor Walter Sendzik and fundraising chair Greg Wight kicked off the community fundraising campaign with a donation from the Lynch family, descendants of Elzear and Leo Lynch, a father and son who died in a construction accident building the fourth Welland Canal in 1925.

“The story of the Lynch family’s tragic loss is a story that resonates with many families across Niagara whose loved ones were lost during construction of the Welland Canal. This memorial is about honouring the fathers, sons, brothers and families of the 137 fallen workers who helped build our community and our economy by building the canal.” stated Mayor Sendzik.

Donations are now being accepted online at www.stcatharines.ca/donate. Donations can also be made in person at the Welland Canal Centre and St. Catharines Museum or in person at the Citizen’s First counter at City Hall.  Donations of $10 or more will receive a tax receipt.

Karen Hunt and Carol Reid, both granddaughters of Elzear Lynch spoke about the importance of the memorial to their family and the descendants of the fallen workers.

“We are so pleased to see the memorial finally coming to life. It will be a special place for family members to remember their loved ones and for the community to gather and remember their sacrifices. We hope that other families and community members will come together to support the memorial.”

The story of Elzear Lynch and his son Leo was featured in a 2013 story in the St. Catharines Standard which inspired the formation of the Welland Canal Fallen Workers Task Force to build a memorial in honour of the 137 fallen workers. All men, the fallen workers came from across the Niagara region, eight provinces and 12 different countries to work on the canal between 1914 and 1932.

Fundraising chair Greg Wight commented on the importance of the community’s support for the project.

“Everyone who learns about the memorial is moved by the story of the fallen workers and the memorial. We have received strong support from all sectors – government, industry, business and labour unions and now we’re asking the community to come forward to help us complete the project and unveil the memorial this year,” said Mr. Wight.

About the Task Force

The Welland Canal Fallen Workers Memorial Task Force is a volunteer group established to finance, design, build and install a memorial to recognize workers who died while building the Welland Ship Canal between 1914 and 1932. Members of the Task Force include representatives from all Welland Canal communities, Niagara Regional Council, the federal government, the marine industry, local historians, the labour community, and community partners from the Canadian Canal Society and the Welland Canals Foundation. Administrative and project support is provided by the City of St. Catharines. The memorial will be installed beside Lock 3 in St. Catharines in fall 2017. For more information about the memorial please visit www.stcatharines.ca/canalworkersmemorial.ca