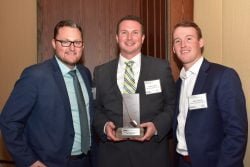 The winners of the 17th annual Brownie Awards were announced on November 29th at a gala held at the Delta Toronto Hotel and Walker Environmental walked away with one of ten awards handed out at the event.

With more than 30 nominations received, the Brownies, awarded by the Canadian Brownfields Network are given out to the top builders, innovators and visionaries that have revitalized communities across Canada with their brownfield rehabilitation projects.

The event was attended by more than 120 brownfield industry professionals. The awards have six categories: reprogram, remediate, reinvest, rebuild, renew and reach out. Walker Environmental was the winning nomination in the reinvest category for its partnership with the Corporation of the City of Welland and their Atlas Landfill Remediation project in Welland, Ontario.

The project used a unique approach to manage risks associated with an abandoned industrial landfill in the City of Welland. The model, developed by Walker Environmental, remediated an old, non-engineered landfill site, brought it into compliance with modern standards and re-opened it as a depository for solid, non-hazardous contaminated soils from brownfield sites and other large developments. This business model turned an environmental liability into a revenue source for both Walker and the City. Upon landfill closure, estimated to be in 2021, the City of Welland is planning to use the site for public passive recreational use.

Mike Watt, Executive Vice-President of Walker Environmental said “I am extremely proud to have been part of something that took an environmental liability and turned it into a municipal and private sector asset. Truly a great example of what happens when government and business work together.”

“We at the city are extremely excited that our partnership with Walker has resulted in a Brownie award. The partnership shows how a tremendous company and proactive community can make things happen. An environmental liability has now transpired into a win-win situation, creating unique opportunities for our municipality that otherwise would not have happened without the revenues generated from this site. Thank you to the Walker team” said Dan Degazio, Director of Economic Development with the Corporation of the City of Welland.

To learn more about the 2016 Brownie Awards visit https://canadianbrownfieldsnetwork.ca/brownfield-awards/brownies.

About Walker Industries and Walker Environmental
Since 1887, Walker Industries, the parent company of Walker Environmental has proven to be a diversified company with a reputation for integrity, care & creativity. Walker is a 5th generation, family-owned Canadian company that has operated from a base in the Niagara Region for over 125 years. Now with facilities across Canada and the United States and employing more than 600 people, the company takes pride in providing infrastructure that builds communities. Walker Industries group of companies offers aggregates, paving & construction, emulsions and environmental waste & recycling solutions.