The Economist Intelligence Unit just released the Top 10 Global Risks and it is scary stuff! The #1 risk is a major downturn in China, followed by a new “cold war” with Russia. An emerging market debt crisis came in at #3. What does this all mean for Canada? Should we be worried?

Firstly, we should congratulate Donald J. Trump for being the first U.S. presidential candidate ever to make it on to the EIU’s list of top risks. He is at #6, just ahead of jihadi terrorism, but slightly behind a break-up of the Eurozone.

The most important risks for Canada can be grouped into two main categories. The first is that emerging market weakness will persist or worsen, driving down demand for commodities and weakening prices. The Economist is most concerned about China, where the country’s debt stock is now equivalent to some 240% of GDP and continued capital outflows will drive further depreciation of the renminbi. 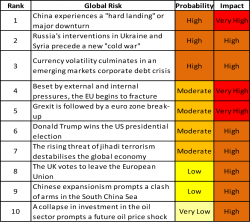 A much slower China would have a depressing effect throughout Asia, the main source of demand for commodities from energy to metals. We recognize that China’s government has enormous resources and tools to stimulate the economy, and it has a solid track record of doing so successfully. But China’s economy is going through a transformative change towards services and consumers and away from the heavy industry and construction that needed vast amounts of raw materials. The point is that a prolonged period of low commodity prices is a real risk for Canada. The second big risk is political and economic instability caused by a break-up in the Eurozone. Collectively, the European Union is the world’s largest economy with GDP of $18.5 trillion (U.S. GDP is $16.9 billion) and a population of 508 million. The risk has hightened because Britain is holding a referendum on June 23 to decide whether to leave or remain in the European Union. Even if the vote is won by the pro-EU side (which seems likely), break-up pressures will remain; Greece is a deeply troubled economy, and the flow of millions of migrants is boosting the political parties that want to build up barriers and leave the union.

Risk is part of life. As the Economist demonstrates, even the world’s richest community and the world’s largest emerging economy are vulnerable to a host of dangers. But there are opportunities in the global economy too. It’s no mystery who can seize those opportuntiies and who’ll be resiliant amid the risks—the nations with sound financial situtions, highly innovative business cultures and highly skilled workers. In short, we need to be focused, all the time, on being competitive. Otherwise the risks, as Donald Trump would say, are “yuuuuge.”