The prize for best economics metaphor in recent weeks goes to the National Bank describing Canada’s loonie as the Revenant, “mauled by bears and left for dead” only to recover triumphantly like Leonardo DiCaprio’s frontiersman. Up until recently, the best DiCaprio movie analogy would have been Titanic (1997). But the dollar had a good week, up at 74 cents, thanks to some positive GDP news. The big question is: will it last?? I haven’t seen the Revenant. But I suspect the bears will come back to bite the loonie a second time and a third.

Last week, the loonie rose on the astonishing strength of Canadian GDP, which soared like the Aviator (2004). That 0.8% annualized growth was a delightful surprise, particularly so many economists (myself included) said Q4 would be near-zero or negative.

What caused this boost in GDP? Was it a surge in exports, a pick-up in government spending or business investment? No, these were all flat or negative, and consumers hardly spent with a teensy 0.2% gain. 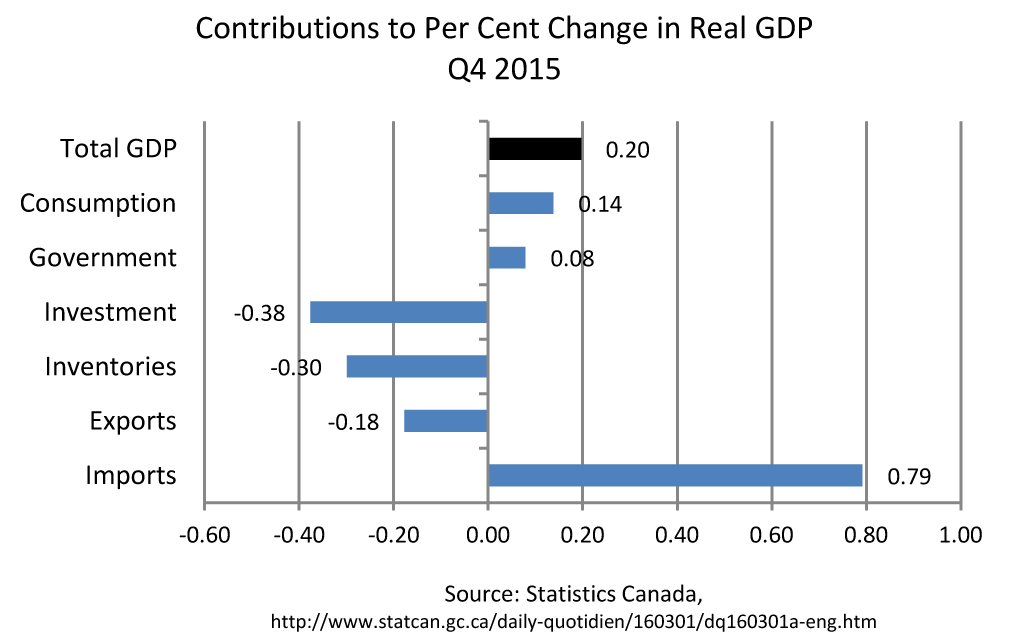 Actually, the biggest contributor to GDP growth came from imports, which fell in Q4. A big decline in imports while consumption and investment are stable, means that we are substituting domestic goods and services in lieu of importing. This indicates more economic activity in Canada, a side effect of the dollar’s fall from 90 cents to 70, but hardly the sign of a resurgent economy. In the absence of the huge boost from tanking imports, Canada’s Q4 GDP growth would have been -0.6%.

The second boost to the loonie came as oil futures rose above $35. The loonie and oil prices are like Romeo and Juliet (1996): they go everywhere together, with correlation exceeding 80%.

Oil has been heading higher on OPEC’s agreement with Russia to freeze oil production at current levels. The trouble is that the global oil market still has a daily surplus of 1.7 million barrels. The OPEC deal won’t make much difference as the cartel only controls 40% of global production. The fastest-growing members, like Iran, are not part of the deal, and the remaining members often cheat, producing above their agreed quotas. After decades of cheating and recrimination, the members of OPEC trust each other far less than the Gangs of New York (2002).

We see oil continuing to struggle with surplus throughout 2016, only returning to balance next year. The U.S. Fed will raise interest rates three more times in 2016 while Canada’s will be flat or even declining. That’s why the Wolves of Wall Street (2013) and the rest of the financial markets will be exiting the Canadian dollar. We forecast the loonie will average 71 cents in 2016 and 74 cents in 2017.

Want more information? Join our conference call on the dollar this Friday, March 11 at 2 p.m. ET. Email me for the conference # and code. I promise no more movie analogies.