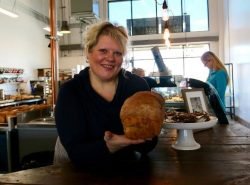 Jennifer Kuzyk’s eyes glistened as she put the final flourishes on a chocolate cake.

It was stunning in its decadence — a beautiful mess of Toblerone, Turtles, popcorn, Kisses, 24 carat gold leaf and a Curly Wurly that took it from mere baked good to art.

But that’s not what made the owner of Edible Options emotional.

It was the trio of women at a nearby table in Kuzyk’s St. Catharines bakery that overwhelmed her. They were gabbing over coffee, sharing stories and treats in the shop that Kuzyk built.

“I pinch myself when I think about what’s happening behind me. People are in my space, enjoying my baking. It’s like a dream,” Kuzyk said as she looked skyward in an effort to dam the tears. “They chose to come here instead of Starbucks. That’s pretty cool.”

As a writer, I get it — the soul-baring and soul-bearing work of creating something for others to enjoy. And when they do enjoy it, it’s a relief that tricks you into wanting to do it again.

Still, Kuzyk’s unfiltered emotion caught me off guard. If anyone could convince people to buck mass-produced treats from one of the world’s most popular coffee chains, it’s Kuzyk.

The woman is formidable, not just for her cake decorating prowess but because of her tenacity in building a successful certified gluten-free bakery that, unless you asked, you’d never know eschewed that most reviled wheat protein.

She tested and tweaked her recipe for gluten-free bread 382 times before she sunk her teeth into what she deemed the perfect loaf. It’s one that closely resembles all those gluten-filled versions.

It’s moist and cohesive, unlike the scads of commercial loaves that have to stay frozen so they don’t crumble into Sahara-dry bits that flavour forgot.

“I told myself I wouldn’t open until I had awesome bread,” Kuzyk said.

But her story begins long before that; long before opening her bakery last June was even a possibility.

I first encountered Kuzyk’s baking magic two years ago when I saw her macarons advertised on the Niagara Local Food Co-op website. My sweet tooth won over my voice of reason and I found myself ordering a batch of the delicate meringue sandwiches.

They were beasts. They didn’t just boast the beautiful bubbly feet that every macaron baker squeals over. These things had legs. They were sublime. Their lightness was deceptive, lulling me into thinking they would barely register on my waistline if I ate two or three in one sitting.

At the time, Kuzyk told me in an interview that baking was a sideline project she started to help a friend with celiac disease.

“I loved the challenge of turning something gluten-free,” Kuzyk said. “I’d make recipes (from a book or website) and they’d never look as good as the photo or comments under the recipe.”

Soon, though, she was making gluten-free pizza crusts for a downtown pizzeria. Her macarons and cookies were appearing in local bakeshops.

Kuzyk would return home at the end of clocking a full day as a plant inspector with the Canadian Food Inspection Agency, spend some time with her young son, then fill orders in a commercial kitchen for five hours every night.

After four hours sleep, she’d wake and do it all over again. One day on the commute to her day job with its relative security and great benefits, her husband Kyle told her to “go big or go home.”

“When are you going to get the chance to do this again?” Kuzyk recalled him asking.

So she took a leave of absence from the CFIA and took a chance this spring on a space in a new Fourth Avenue strip mall.

A sign that reads “Actually, I can” hangs in the open kitchen where her staff turn out 400 loaves of gluten-free bread a week to the soundtrack of whirring stand-mixers. The sign was a gift from family to keep Kuzyk on track during those moments of self-doubt and anxiety that every entrepreneur has when they take the leap.

I can’t think of three words better suited to Kuzyk as I scan the offerings of cupcakes, cookies, those macarons and date squares that rival her bread in popularity. Most days they sell out. Leftovers go home with staff and never see a second day on the shelf.

There are two words you will never see, however: Gluten-free.

Most of the items on offer don’t contain many common food allergens, including refined sugar, corn and legumes. Kuzyk will happily share her ingredient list with any customer who asks.

She even has a dedicated vegan oven for the plant-based dieters. Her connections at the CFIA tipped her off about how to keep the nut-free crowd safe by avoiding cross-contamination.

It all makes her bakery inclusive of a wide range of diets but Kuzyk knows how off-putting that can be for some.

“You will not see gluten-free. We’d tell people we’re gluten-free and they’d say ‘I eat gluten’ and walk out the door. The history of gluten-free food, people think it’s crumbly and dry.”

But it’s people like the trio of women at the table nearby who are there because they can safely enjoy lunch or a treat — or because they don’t care, Kuzyk’s baking is that good — that leave her feeling grateful.

Ditto for the indebted mother who can finally give her child the birthday cake of his dreams, or the person with a gluten allergy who avoided bread for 40 years until now.

“People come in and say, ‘I hear you have something gluten-free,’” Kuzyk says. “We tell them everything is and their heads spin.”