After the U.S. election is finally over, will the fever break? For months, the Trump campaign has been a frothing festival of misery, calling the U.S. economy “terrible,” “very bad” and “a complete disaster.” The consensus explanation for Mr. Trump’s support is that the working class is struggling desperately in a weak economy and will vote for anything to shake up the system. Will this continue or will Americans wake from a fevered dream to realize that things are ok?

It’s certainly true that not everyone benefits from the global economy. Trade and technology tend to displace low-skilled jobs and create higher paying, high-skilled jobs. We recognize that people have been through tough times. But America is not a nation of unemployed textile workers, and there is actually a lot of good news in the U.S. economy.

Let’s start with jobs. Since 2011, the U.S. has been a job creation machine: its 72 months of consecutive gains produced an average of 200,000 jobs per month, the biggest growth run on record. The unemployment rate is now just 5%, which also means that job security is dramatically improved. 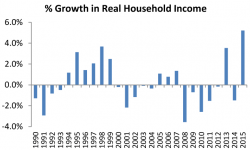 What about wages? Well it’s true, of course, that real household income has stagnated for the past 16 years. However, 2015 saw real household incomes climb 5.2%, the fastest rate on record. And the bottom 10% of incomes (the poor) received the greatest gains with incomes rising 7.9%. Consumer confidence is up near record levels.

If consumers are in good shape, U.S. business is in great shape. Corporate profits are close to an all-time high of $2.2 trillion and they are holding a record $1.7 trillion in cash, the most liquid they have ever been. And although investment has been weak, surveys of hiring intentions are excellent with almost one-quarter of U.S. employers planning to increase staff in the near future.

As a result of all this, the U.S. government is doing much better: the deficit has fallen by two-thirds since the great recession, largely because of rising tax revenues. Overall GDP growth hasn’t been very exciting, but the Canadian Chamber is forecasting growth of 1.8% in 2016 and 2.3% in 2017, which compares well with other OECD countries.

U.S. economic performance doesn’t justify the widespread anger about the economy or the rising opposition to trade and immigration. This is a big problem with real consequences. Even Germany, the world’s most trade-dependent export success story is now paralyzed by anti-trade sentiment. If improving economic circumstances don’t calm this fever, is there anything that policymakers and business leaders can do? It might help to better explain how trade and immigration make us wealthier, as well increasing training for workers. Perhaps this is just the job for a brand new president! (Personally, I think Hillary will win the popular vote by 14% and carry 42 states, but you should always be wary of economists’ predictions.)