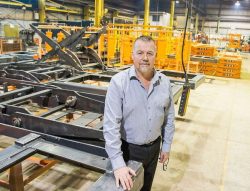 Thomas Beach is an optimist. He has to be.

Currency markets, business shocks and surprises must be deftly navigated in his world.

So the shock-election of Donald Trump as America’s next president won’t change things for his Grimsby company Handling Specialty, which has enduring business links with the U.S.

“I have relationships that I believe in,” said Beach, the company president. “And I believe they will outlive a short-term ripple effect of Trump’s appointment.

“I can’t control Trump, the oil prices, currencies, but I can definitely do something positive for (our company) … we can’t stick our head in the sand, but I want to spend more energy on what we can do to make our lives better.

And as for his American customers — “we do tons of business.”

“Over the past 36 months, we’ve been able to acquire some nice contracts in Canada,” Beach said, of his company that makes large-scale handling devices and intelligent equipment.

“I am grateful for our neighbour. We fly a U.S. flag on our building for a reason; they are here all the time,” said Beach, whose company also has a plant in Hamilton, with more than 100 employees working at both sites.

Beach also counsels some perspective. With all the things crowding Trump’s agenda, “he can’t cowboy things (and) bring the U.S. relationship with us to its knees, it’s probably the model relationship across the world.”

Top of mind for many is Trump’s strong anti-free trade stance during the election.

The president-elect has promised to renegotiate or rip up the North American Free Trade Agreement and has Republican control in both the legislative and executive branches that could make the threat happen.

Concerns also loom about trade flows in general between Canada, the U.S. and Mexico, especially given Trump’s strong negative sentiments about his neighbour to the south.

Mishka Balsom, CEO of the Greater Niagara Chamber of Commerce, said its too early to gauge the impact of a Trump administration.

“We had initial concerns about how the market would react, and the impact about NAFTA,” Balsom said.

“But we have all the confidence in the American institutions and the established relationships we have with our valued trade partners.”

Balsom said it’s important to realize many of her chamber members purchase a lot of goods and services in the U.S., so the trade relationship is an interwoven one for the Niagara business community.

“We really are so economically linked, and so close to the U.S. here,” she said.