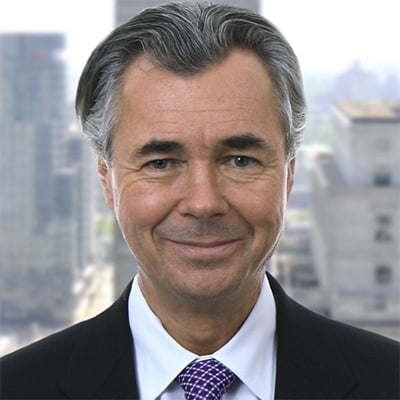 The Honourable Pierre Pettigrew is Executive Advisor, International at Deloitte Canada. He is also the Government of Canada Special Envoy for the Canada-European Union Trade Agreement. Pierre regularly arbitrates international trade disputes between countries at the World Trade Organization in Geneva.

First elected in 1996, as member of Parliament for Papineau–Saint-Michel in Montréal, Pierre Pettigrew was a strong advocate for international trade and multilateralism throughout his time in government.

As minister of foreign affairs, he led an internationally lauded policy review that provided Canada with a fully integrated approach to diplomacy, defence, trade and development.

As minister for international trade, he chaired the Ministerial Meeting of the Free Trade Area of the Americas, in Toronto, Ontario, in November 1999; the Working Group on Implementation and Rules at the World Trade Organization’s Seattle Ministerial Conference in December 1999; and the Working Group on “Singapore” Issues at the Fourth WTO Ministerial Conference in Doha, Qatar, in November 2001. He also led trade missions to Algeria, China, Germany, India, Mexico, Morocco, Nigeria, Russia, South Africa and elsewhere.

Mr. Pettigrew is the author of The New Politics of Confidence, a book on globalization and the art of governing.

Mr. Pettigrew holds a Bachelor of Arts degree in philosophy from the University of Quebec in Trois-Rivières and a Master of Philosophy in International Relations degree from Balliol College, at the University of Oxford in the United Kingdom.