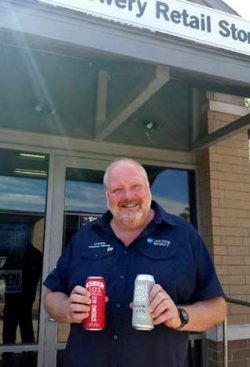 The new competition is open to any college or university offering courses in brewing. The competition saw entries from 10 different colleges and universities, and seven took home medals in five categories. Niagara College took home four medals for student-brewed beers, including: gold for 16-73 Pils in the German Pilsner category; gold for its Caramel Machiato Golden Stout in the Open category; silver for Witty Grandpa in the Witbier category; and bronze for its Czarina in the Imperial Stout category. The gold winning pilsner was designed and brewed by third-semester students while the Czarina and Caramel Machiato Golden Stout were individual efforts by fourth-semester student Keegan Dombrosky.

“The experience of being able to compete in a competition like this was truly invaluable to my continued growth as a brewer,” said Dombrosky, who came to Niagara College from Simsbury, CT, and will graduate from the Brewmaster and Brewery Operations Management program this fall. “To be able to test my mettle against the best brewing students in North America and have such success gives me great confidence and excitement as I prepare to finish this amazing program. The purpose of this competition was to determine the best future brewers in North America and to now be a part of that discussion is a great honor.”

“It is always fun to be first and for our students to win the inaugural U.S. Open College Beer Championship is excellent,” said Niagara College brewmaster and professor Jon Downing. “The entries were designed and brewed by students from all four semesters of our Brewmaster and Brewery Operations Management program. As we prepare our students to excel in the burgeoning craft brewing industry, it’s very satisfying to see their work earn international recognition.”

Judging for the competitions took place in Oxford, OH, Atlanta, GA and Auburn, AB. Sixteen Niagara College Brewmaster and Brewery Operations Management program took part in the judging, along with Downing, who serves as director of judging. Neither Downing nor the students judged any Niagara College Teaching Brewery entries.

For info about the U.S. Open Beer Championship visit usopenbeer.com

NC’s Teaching Brewery, the first fully-licensed teaching brewery in Canada, opened at the College’s Niagara-on-the-Lake campus in April 2011. The facility allows students to brew their own craft beer on campus and get hands-on training in beer making, management and sensory evaluation. The beers are also sold on-campus at the NC Teaching Brewery retail store.