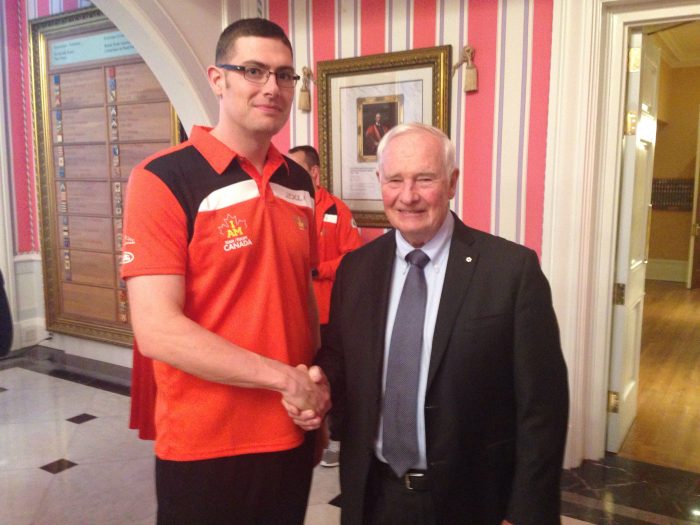 The Bachelor of Business Administration – Human Resources student is among 90 athletes proudly representing the nation as part of Team Canada at the 2017 Invictus Games. The international sporting event features seven days of adapted sports competition for wounded, ill and injured serving members of the military as well as veterans. This year, 550 competitors from 17 nations will participate in the Toronto Invictus Games, to be held from Sept. 23 to 30.

A long-time resident of Niagara Falls, Pulver graduated from NC’s Police Foundations program in 2003. He served as a military police corporal from 2005 to 2010 at Canadian Forces Base Borden, CFB Esquimalt and CFB Kingston. An ankle injury and post-traumatic stress disorder led him to retire from the Forces. This month, he returned to Niagara College to pursue his new career aspirations in Human Resources.

At the Invictus Games, Pulver will be participating in shot put on Sept. 24, discus on Sept. 25, and wheelchair basketball on Sept. 28-29. For Pulver, the latter is reminiscent of his days playing basketball for the NC team.

“I played basketball at Niagara College when I was able bodied, now not even an injury can stop me from playing the game I love; I just play in a wheelchair now,” said Pulver. “In some strange way, my basketball career is coming full circle through Niagara College.”

Competing in the Games is a first for Pulver. He became inspired by the courage of the 2016 Invictus Games and decided to apply. He has been training in track and field, and wheelchair basketball since November 2016 when he was told he was part of the team.

“I am very excited to compete as this is my chance to show my friends and family that I am on the road to recovery from my injuries,” he said.

Pulver noted he is looking forward to seeing his teammates at the Games.

“Once you leave the military, the sense of the brother/sisterhood is lost as civilians do not understand our culture or our injures,” said Pulver. “Getting to hang out with fellow vets who are struggling with similar injures feels like I am normal again.”

Created by Prince Harry, the Invictus Games began in March 2014 in London, United Kingdom. The second Games took place in May 2016 at Walt Disney World near Orlando, Florida. For more information about the Invictus Games visit http://www.invictusgames2017.com/

Currently celebrating its 50th year as a College of Applied Arts and Technology, NC is a leader in applied education and a key contributor to the economies of Niagara and Ontario. A regional college with global reach, NC offers more than 100 diploma, bachelor degree and advanced level programs. Visit niagaracollege.ca.