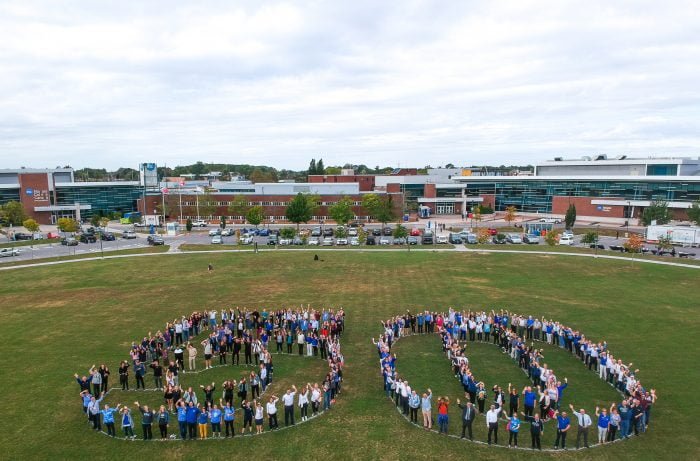 Past met present on October 4 to mark a special milestone at Niagara College: its 50th anniversary celebration.

Current students, staff, faculty and the community joined alumni and retirees for the event at the Welland Campus. The event kicked off with speeches from College and community representatives, before guests decked out in college colours – blue and white – formed a ‘50’ on the front lawn for a commemorative aerial photograph.

College president Dan Patterson noted how the college has risen from its humble beginnings with only about 400 students to a student population of more than 10,000 strong today.

“The heart of our success is about teaching and learning, and about focusing on putting students first,” he said. “An unwavering commitment to students over these 50 years has put us in the top tier in a place that all of us are so very proud of.”

Patterson noted how the College has also been intricately woven into the fabric of the Niagara region, with economic development central to its focus, and how the College’s pre-emptive, innovative programs support all sectors of the region’s economy. He also spoke of how it has grown into a global college with an increasing international enrolment as well as new projects and partnerships around the world.

“We are bringing the world to Niagara and taking Niagara to the world,” said Patterson.

Speaking on behalf of the College’s Retirees Association was Larry Cote, former faculty from the School of Business who taught on the very first day of classes 50 years ago.

“Clearly, the growth in the physical facilities and the technologies we see here today are beyond what early employees could hardly ever imagine,” said Cote. “We started in a portable steel building in the middle of a cow pasture on a dirt road in the outskirts of Welland. For most of my fellow retirees, the current facilities here and in NOTL are beyond being just spectacular.”

Student Administrative Council president Ryan Huckla thanked the College for the positive impact it has had on students’ lives.

Welland mayor Frank Campion applauded the College for its vital role in the city’s economic development, anchoring its ability to attract development and industry.

“As a community we should never forget the implications of having Niagara College here. It’s very transformative for us,” said Campion.

The event featured Colleges Ontario’s Amazing 50 mobile trailer which is touring college campuses across the province to mark this significant milestone. The travelling interactive museum showcases the history of Ontario colleges over the past 50 years, displays leading-edge innovation at colleges, profiles graduate successes throughout the world, and more. For info visit http://amazing50.ca/

Booths from various areas across Niagara College – including the libraries, Retirees Association, Student Administrative Council, Marketing and Recruitment, and the Centre for Student Engagement and Leadership – were on display for the event, showcasing the college’s history as well as campus life today. The College gave away gift boxes of tree seedlings, allowing guests to transport some of NC’s roots to their homes. As part of its 50th anniversary celebrations, 50 trees will be planted at the College.

Celebrations extended beyond campus borders. To honour the College’s 50th anniversary, the City of Welland officially declared the week of October 2-6: Niagara College Week. On October 3, the Niagara College flag was raised at Niagara Region headquarters to mark the occasion.

Niagara College unveiled its 50-year anniversary website last year which includes an archive of college yearbooks, scrapbooks and newspaper clippings that date back to 1967.  Visit niagaracollege.ca/50years. Last fall, the Welland Campus address officially changed to one bearing the college name: 100 Niagara College Blvd. in honour of the college milestone. A 50th anniversary gala dinner was also held at the NOTL Campus in May.

This summer, the City of Welland displayed a floral tribute to the College’s 50-year anniversary at the corner of Prince Charles Drive and Colbeck Drive.

Currently celebrating its 50th year as a College of Applied Arts and Technology, NC is a leader in applied education and a key contributor to the economies of Niagara and Ontario. A regional college with global reach, NC offers more than 100 diploma, bachelor degree and advanced level programs. Visit niagaracollege.ca