BEAC honoured outstanding work by students and recent graduates, judging more than 150 entries from colleges and universities across Canada.

“Once again, the overall quality of the audio and video production continues to amaze the judges,” said judging coordinator Paul Papadopoulos.

“Making a good movie – either a documentary or drama – does not happen by accident; it’s a balance between technical skill, storytelling craft and creativity,” said NC’s professor of film production, Luke Hutton. “Winning the BEAC award for best drama and documentary is not only an honour for the students, but serves as testament that Niagara College is teaching the next generation of filmmakers the right things to help kick-start their careers.”

NC president Dan Patterson added his praise. “The awards are a testament to hard work by both the students and the faculty and staff; we are very proud of the quality of their work,” he said.

The students were pleased with BEAC’s decision to honour their work. 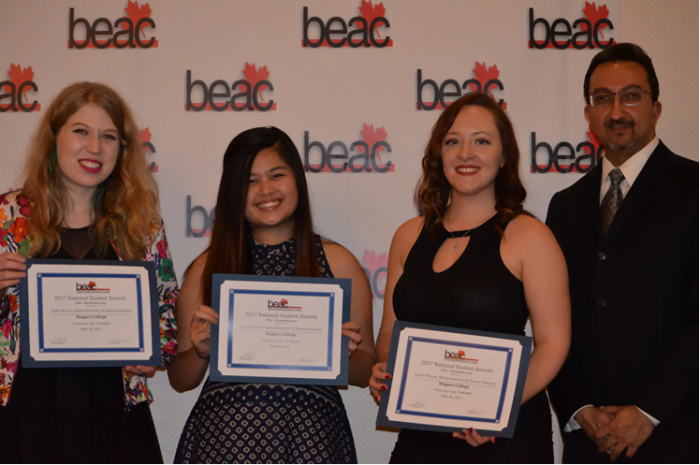 Niagara College’s winners in the documentary long category for “8 Weeks” were presented with their award by BEAC president Ashif Jivrav, far right. They are, from left: Maika Boettcher, Dianne Cabansay and Taylor Murray.

“I’m humbled to receive a national award for our documentary,” said Cabansay. “We would not have been able to do it without the help of our production crew, who put so much time and effort in. Of course, we would not have been able to do this without the story of my good friend, Steve Wang; his experience with the whole refugee claim as a gay man from China is impactful in many ways, so the crew and I are glad that his story is being recognized by others.”

“I’m thrilled about the recognition of this project which our team worked hard on,” said  Murray. “I hope that the film continues its success as we continue to promote it.”

“It’s quite surreal to think that we have won a national award for our work,” said Boettcher. “However, it wasn’t difficult wanting to make Steven’s incredible story a documentary that we can all be proud of.” 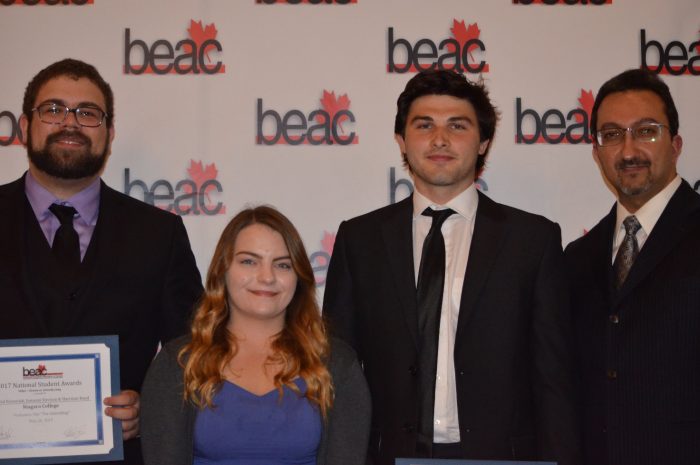 “I would like to thank the very talented cast and crew for their incredible hard work,” said Bond. “There was a great deal of dedication put towards this film.”

“Working on The Debriefing was an incredible experience to cap off my final year of film school,” said Davison. “I was able to use what I’d been taught to help create a project I can be really proud of, with a team of people I am equally proud of.”

“This award means a lot to the whole crew,” said Kwasniak. “We all worked diligently to make sure the film was a success. Thank you to everyone that helped in making this incredible film.” 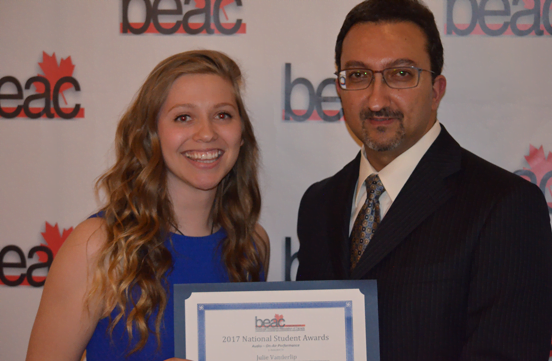 Niagara College’s Julie Vanderlip was presented with the award for radio on-air performance by Ashif Jivrav, president of the Broadcast Educators Association of Canada.

From Julie Vanderlip, recipient of the Radio On-Air Performance:

“I am grateful for this opportunity, to say the least,” said Vanderlip. “I’m aware of how lucky I am for my mentors, as they are the ones who helped to shape me into who I am today.”

“The BEAC award is hopefully the first step in the students’ journeys to becoming the next generation of creative leaders in the expanding Canadian film and television industry,” added Hutton.

BEAC is dedicated to professional development of faculty and administrators in radio, television, broadcast journalism and new media programs in colleges and universities in Canada.