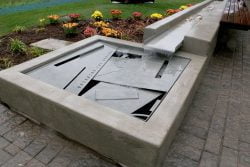 The bond between Brock University and the Rotary Club of St. Catharines became a bit tighter today when Brock formally dedicated the Rotary Reflecting Pool at its Marilyn I. Walker School of Fine and Performing Arts in downtown St. Catharines.

Under a drizzly fall sky, representatives from Rotary, the University and the City joined students and local residents for the first look at the new artistic water feature as it was unveiled during a midday ceremony.

The University dedicated the pool to recognize Rotary Club of St. Catharines’ support in helping Brock locate its arts school into a restored industrial heritage site. In doing so, the Walker School became a key factor in the city centre’s economic and cultural revival, alongside other major downtown projects the Meridian Centre and FirstOntario Performing Arts Centre, which also received support from Rotary Club of St. Catharines.

In 2011, as Brock was seeking government and community help to relocate the MIWSFPA from its main campus into the city’s core, Rotary Club of St. Catharines announced it would donate $100,000 to the cause, the club’s largest single gift in its nearly 100-year history.

Over the next four years the school took shape in an award-winning project that integrated new construction with a carefully refurbished textile mill dating to the 19thcentury. The project — made possible by a $26-million investment from the Province of Ontario, and provision of the former industrial site from the City of St. Catharines — was opened in the fall of 2015.

Set amidst modernist sculptures in a greenspace beside the Walker School, the Rotary Reflecting Pool’s gently flowing current echoes the tranquility of a semi-private space that can be used by students and members of the public.

Brock’s Interim President Tom Traves said the University is very pleased to partner with an organization like Rotary on an investment that will benefit not just students but citizens all across Niagara.

“Just as the Welland Canal contributed to the life of the City many years ago, the Marilyn I. Walker School of Fine and Performing Arts and the Performing Arts Centre are contributing to its revitalization,” said Traves. “As we stand in this space, we further transform this area and we thank Rotary for its support of Brock.”

Rotary Club of St. Catharines President George Darte said the club agreed to contribute such a large sum because the Brock project represented a historic opportunity the community could not afford to miss out on.

“Our members are dedicated to the vitality and the prosperity of the community,” said Darte. “Through our support to the Marilyn I. Walker School of Fine and Performing Arts, we are delighted to be nurturing the next generation of artists and performers here in St. Catharines, while at the same time contributing to the revitalization of our downtown core.”

Liz Palmieri, Rotary Club of St. Catharines past president, who was chair of the club’s Major Grants Committee at the time of the gift, said club members knew what they had to do.

“We felt strongly about our commitment to the arts in our community,” said Palmieri, “and we are proud to be major supporters of an institution that embodies the vision of Marilyn I. Walker, one of our community’s finest citizens, artists and philanthropists. It is a fitting tribute to her memory.”

Like the Walker School project itself, the pool’s actual creation is the result of many parties working together.

It was designed in a collaboration between Scott Roper, of Brock Campus Planning, Design and Construction; David Vivian, Director of the MIWSFPA; Arie Shipper of Merit Contractors; and Wally Healey and Brian McLeod of Stevensville Lawn Service, with artist Elizabeth Chitty who consulted on details of local history and geography.

The project’s strong focal point occurs where the water flows through a metal grate fashioned by Fenwick blacksmith Ken Robertson. The grate consists of a series of panels set at different angles, representing the hillsides of the Walker School’s valley setting, as well as iron cutouts to portray Twelve Mile Creek, the Niagara River, the Welland Canal and the Raceway which used to course through the property on which the Walker School now stands.

The following message is on a plaque beside the new water feature:

The Rotary Reflecting Pool is dedicated to the Rotary Club of St. Catharines and to the historical significance of the original Welland Canal which was located nearby. Rotary’s support for this place of tranquility and creative reflection for students and the community is an investment in arts and culture that celebrates the revitalization of the St. Catharines downtown core.

There are over 1.2 million Rotarians worldwide whose motto is “Service Above Self.” Rotarians are dedicated to important global causes including the quest to eradicate polio, education, clean drinking water, assistance for mothers and children, and numerous other initiatives.

The Marilyn I. Walker School of Fine and Performing Arts occupies the historic 1880’s Canada Haircloth Building and 1940’s storage shed near what was once the third lock of the first Welland Canal. Water was diverted from the canal along the north side of the building to provide electrical power to the mill. The Welland Canal transformed the local economy and navigation of the entire region.