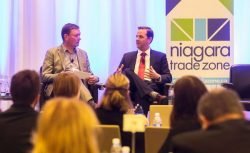 Speedy Niagara collaboration was cited as crucial to a decision by a manufacturer in building a large plant here.

On Thursday, Jeremy Amin, regional manager of global operations properties at General Electric Canada spoke at the Niagara Economic Summit about what sent the company to Welland.

Using the latest technology, it will initially be manufacturing products and parts for GE Power’s reciprocating gas engines, components for compression, mechanical drive, power generation, and its transportation diesel engines.

“From our perspective, the future of Niagara is bright, quite brilliant, and GE is excited to be a part of it,” he told the crowd of about 340 at White Oaks in Niagara-on-the-Lake.

This year’s annual summit brought together regional leaders in business, government, non-profits and others and was hosted by the Greater Niagara Chamber of Commerce.

In his keynote speech, Amin spoke about his company’s Welland factory, to be one of GE’s high-end “brilliant” sites.

The journey, which took place over the past year, “was the result of an incredible hard work and networking on the Niagara economic development (teams) … they used their extensive networks relentlessly pursing an opportunity to meet with the GE team on this project,” he said.

He said up to that point, Niagara had not been on the GE radar.

“The entire group was working together in a united manner to be successful in this project,” Amin said. “In a matter of a couple of days, they produced an incredible GE-focused marketing package tying in our ’brilliant’ factory tagline to all of the regional capabilities.”

The teams, that included Niagara Region, City of Welland, the province and others, helped with that smooth and open process.

Overall, “there was a sense of urgency,” he said in that “one-team approach” in Niagara.

He said GE would also not listen to any “noise from independent municipalities lobbying for their own interest.”

It was quickly determined “Niagara was a great opportunity for us,” he said.

He also spoke warmly about working with the region’s broader business community, development and education community.

GE was also “very excited” about programs at Brock and Niagara College, Amin added. “They are going to produce graduates with the skills to help advanced manufacturing capabilities and general business needs, to grow and continue to innovate into the future.”

“We need to make sure this plant is successful,” Amin answered.

He said GE came to the region based on many factors, including its people-talent and infrastructure to support that.

“As we get settled, and ramp up our production in this first phase of our facility, GE Canada wants nothing more than to expand our footprint.

“We want that growth, we don’t know what it’s going to look like,” he said. “The opportunities come when they come.”

Other panelists and speakers discussed misconceptions about Niagara’s economy, the regional job market, the skills gap and workers from the Millennial generation.