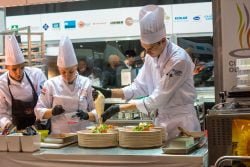 Junior Culinary Team Canada is stirring up excitement in Germany with its second medal at the Culinary Olympics.

Comprised of recent graduates from Niagara College’s Canadian Food and Wine Institute, the team is currently representing Canada at the IKA/ Culinary Olympics in Erfurt, Germany.

“The team is still in the game to finish among the top three in the world,” said team manager Craig Youdale, dean of Niagara College’s Canadian Food and Wine Institute. “This is not over and we are in the running to finish on the podium at the Culinary Olympics, which is our ultimate goal.”

Youdale noted that while the colour of the medals have been announced, teams do not know yet know their actual scores.  For each competition, teams are awarded gold for a score of 90 or higher, silver for 80 or higher, and bronze for 70 or higher. While a gold, silver, bronze achievement is announced following the competitions, teams will not become aware of their overall score and ranking until the closing ceremony on October 26. Each team will be given a score out of 100 that will be averaged to provide an overall ranking in the world.

As of October 24, Junior Culinary Team Canada was among only five out of the 20 junior national culinary teams competing at the event to achieve a gold medal for a score of over 90 – joining Denmark, Austria, Sweden and Switzerland.

Teams from other countries will continue to compete in the two Culinary Olympic competitions on October 25. Final scores and awards will be presented with overall world rankings at the closing ceremony on October 26.

Junior Culinary Team is among 20 junior national teams – among 2,000 chefs from more than 50 countries around the world – competing at the 24th IKA / Culinary Olympics in Erfurt, Germany from October 22 to 25.  The International Culinary Art Exhibition is the largest international professional competition for chefs, cooks and pastry chefs, held once every four years. Visit the IKA website athttp://www.olympiade-der-koeche.com/en.html 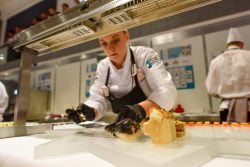 Niagara College’s Junior Culinary Team Canada is proving that it has the recipe for success, after winning a gold medal in its first of two competitions at the Culinary Olympics.

The team from Niagara College’s Canadian Food and Wine Institute competed in its first competition at the IKA /Culinary Olympics in Erfurt, Germany on October 22: the Edible Buffet competition. During the rigorous five-hour marathon, teams must prepare a buffet consisting of finger food and terrines that are presented on a platter and two action stations – one for a main course and one for dessert. Teams are judged on factors including cleanliness, demeanour and efficiency, in addition to taste of food they prepare.

The team received its results on October 23, as they were busy preparing for their second competition on October 24: a hot three-course luncheon competition for 60 people (6 a.m. to 2:30 p.m. German time; midnight to 8:30 a.m. EST).

“This is a great accomplishment and a testament to the hard work they have put in over the years,” said team manager, and dean of the College’s CFWI, Craig Youdale. “Our College should be super excited about their accomplishment, and it was special to see the NC button take on a global challenge and come out shining like gold.” 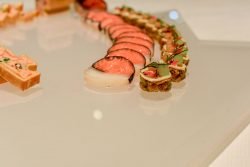 Youdale noted that this first medal achieved was only the first step for the team. “We step in the kitchen tomorrow with a chance for a second gold medal and the opportunity to become one of the top three teams on the planet,” said Youdale.

“We had a very strong performance yesterday and we are extremely pleased with the result,” said team captain Ben Lillico. “This could not be possible without the hard work, dedication and passion put in by each team member.”

Lillico also noted that while the team celebrated their achievement, they were focused on preparing for their next challenge. “We are excited because we now go into our program tomorrow on a high note,” he said.

The team’s final score and overall ranking will be announced at the IKA / Culinary Olympics closing ceremony on October 26.

Junior Culinary Team is among 20 junior national teams – among 2,000 chefs from more than 50 countries around the world – competing at the 24th IKA / Culinary Olympics in Erfurt, Germany from October 22 to 25. Known as the IKA/Culinary Olympics, the International Culinary Art Exhibition is the largest international professional competition for chefs, cooks and pastry chefs, held once every four years. Visit the IKA website at http://www.olympiade-der-koeche.com/en.html

For information about the team’s daily progress in Germany, visit ncjrculinaryteamcanada.ca.

In October 2013, a team of culinary students and recent graduates from the College’s Canadian Food and Wine Institute won the title of Junior Culinary Team Canada in a victory over other culinary teams at The Canadian Culinary Federation of Chefs and Cooks (CFCC) Junior Culinary Team Selection Competition. The distinction came with the right to represent Canada at international culinary competitions for three years, including the IKA / Culinary Olympics in Erfurt, Germany in October 2016.