The overarching theme at last week’s Republican convention was one of anger—fury at government and “a rigged system” and rage at an economy that is supposedly “not working.” But, Donald Trump’s biggest applause came when he slammed trade and immigration (“Build the wall! Build the wall!”).

And yet this is not just an American phenomenon. These themes would have been familiar to the British who voted to exit the European Union or in France, Austria, the Netherlands, Poland, Switzerland, Denmark and Sweden where extreme-right parties are leading in the polls. So why are voters so angry? Have trade and globalization gone too far?

Or maybe not far enough! The graph below shows how incomes have grown over 20 years for people at different levels of the global income distribution. We can see that the bottom 10% saw incomes rise almost 40%, so the world’s poorest are better off. The really big winners came from Asia where China’s urban median income grew by almost 300% while in Indonesia and Thailand, it roughly doubled. The top 1%, of course, did well. 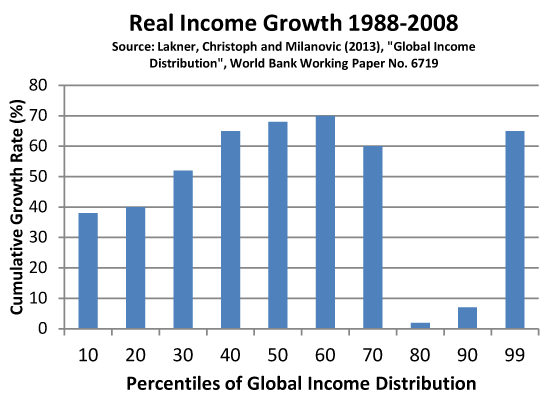 Those who gained the least were in the 80th and 90th percentiles—people in rich countries who are in the lower halves of national income distributions. In the mighty German economy, those folks gained just 7% in real terms over 20 years while the U.S. was essentially flat, and Japan saw incomes decline.

Should we blame trade? Research shows that some workers in the rich world struggled with the rise of China’s exports. Trade creates lots of jobs, but when losses are concentrated in certain sectors or regions, it’s difficult for workers to find other employment.

However, a recent paper by the IMF shows that almost all of the world’s income inequality and working class wage stagnation is driven by technology. This is because the automation of routine work by robotics and computing has increased the demand and price premium on higher skills while reducing opportunities in relatively lower skill sectors. From robot greeters and automated checkouts to self-driving vehicles, this transformation is accelerating.

No one can build a wall that will stop technology from coming, so it’s easier for populist leaders to blame trade and immigration. This is not surprising. In 1824, Thomas MacAulay said, “Free trade, one of the greatest blessings which a government can confer on a people, is in almost every country unpopular.” We’ve been arguing about immigration for just as long even though all the evidence shows that immigration actually raises incomes of native workers.

Protectionism is always bad news for Canada. We have to press ahead with CETA and the Trans-Pacific Partnership while doing a better job explaining the benefits from trade. Building walls is a dead end.