Soaring electricity costs in Ontario might be the single greatest threat to business in the province. In the first of a three-part series, we examine how the system works, and what has allowed this to happen.

The cost of electricity in Ontario has been increasing at four times the rate of inflation since 2006. Everyone in Ontario has felt the effects. The rate hikes have been particularly punishing for seniors and people on fixed incomes whose bills have risen far above what they can pay, for residents in rural Ontario who are paying far more than their counterparts in cities, but also for businesses, particularly heavy power users, to whom electricity represents a huge portion of their costs. The Ontario Chamber of Commerce’s Empowering Ontario report found that as many as 1 in 20 Ontario businesses believed they would be forced to close due to electricity costs within five years.

Like the provincial debt, this problem has been growing for a long time, and if the present government is guilty of anything, it is that they have perhaps not dealt with it as well as they might have, not that they caused it. In the first post of this series, we’ll examine the current status of electricity pricing and generation in Ontario.

Ernie Eves’ Progressive Conservative government was plagued by spending scandals and allegations of corruption within his party, much like the current Liberal government. The media regularly ran stories about the alleged mismanagement of Ontario’s electricity generation under the governments of both Eves and his predecessor, Mike Harris, and the blackout of 2003 raised questions about the PCs’ ability to keep the lights on at all. Ironically, the issue was actually a major part of the Liberal election campaign against them.

The sale of Hydro One was first proposed when Mike Harris was Premier, and then pursued by Eves, who changed his mind in the face of rising prices and a consumer revolt. The Liberals opposed the sale in 2003, re-evaluated but ultimately rejected it in 2009, and returned to it in 2015.

When Dalton McGuinty was first elected in 2003, the all-in cost of power was 6.5 cents per kWh, including a 0.7 cent debt-retirement charge. Now, after new increases that took effect on May 1, 2016, rates vary from 8.7 cents per kWh for off-peak usage to as much as 18 cents on-peak. This increase has been far in excess of the rate of inflation.

Some of the increase is due to changes in the way we generate power and our shift away from fossil fuels. Climate change is already harming Niagara farmers and viticulturists, and the world is facing the prospect of greater environmental disasters to come. It is probably no exaggeration to say that abandoning power generation from fossil fuels has become an imperative for our entire civilization.

The Ontario government promised to phase out coal-fired power generation in the province completely, and delivered on that in 2014. Ten years ago, a quarter of the province’s power was generated by coal; today, none is. This corresponds into a 17 per cent reduction in GHG (greenhouse gas) emissions, or 34 megatonnes – the single largest GHG reduction measure anywhere in North America. 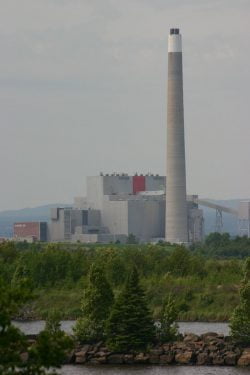 As a result, the power grid in Ontario is now 90 per cent renewable, and we have become a leader in renewable energy both in Canada and the world. Alberta and Saskatchewan are looking to phase out the fossil fuel plants on which they currently rely (in 2010, Ontario generated 12,285 GWh from coal, while Saskatchewan generated 12,084 and Alberta a staggering 41,013), and they will probably learn from Ontario’s experience when they do it.

After the coal phase-out, the single biggest source of electricity in Ontario is now nuclear. This has necessitated extending the lifespans of old nuclear plants in Ontario, such as Pickering, which was originally commissioned in 1971 and is now the oldest commercial nuclear plant in the country. We’ll go into more detail about them in Part 2.

Gas has become Ontario’s second-greatest source of electricity, currently generating just under 10,000 MW with capacity planned to increase to almost 11,000 MW by 2020. Gas has become a very popular choice for new generating plants across the world and although it is not completely clean, it is dramatically cleaner than coal, so the trend towards gas has noticeably decreased global CO2 levels.

But when I mentioned Ontario gas plants, that probably wasn’t the first thing that you thought of. An explanation of the scandal properly belongs in Part 2 of this series, in which we’ll get into the causes of high power bills.

To assess our prices in Ontario, all we really have to compare with is our previous bills, and compared to them, the increase is huge. The average monthly household bill is $246 in Toronto, $229 in low-density rural Ontario, and $200 in medium-density rural Ontario, based on a consumption of 1,000 kWh per month. These rates are expensive compared to $100 a month in Montreal, $117 in Winnipeg, or $128 in Illinois; comparable to Chicago at $210 or Halifax at $220, and a bargain compared to $383 in Boston, $409 in New York City, or $430 in San Francisco. To keep it in perspective, although Ontario prices have increased enormously, there are still many other jurisdictions in Canada and America that pay far more than we do for power – and the claim that Ontario’s energy costs are the highest in North America is simply false.

There’s a difference between rates and the final electricity bill, and in the former, Ontario costs are also high, but again, not the highest in North America or even close to it. In terms of energy rates, Prince Edward Island, Nova Scotia, Illinois, Michigan, California, New York, and Massachusetts all pay considerably more for power than Ontario. New York pays 28.9 cents per kilowatt-hour (¢/kWh) compared to Ontario’s 14.3, Boston pays a similar amount, and even New England rates look like a bargain compared to 41.4 ¢/kWh in Australia or 42.8 in Germany.

But this is not to say that Ontario’s bills aren’t higher and getting higher than they should be. What’s tacked on to Ontario bills to make them so high is the Global Adjustment (GA). For residential and small business customers, the GA is simply rolled into your overall rate, so you are not being shown what percentage of your bill goes into it. The GA covers:

Ontario Clean Air Alliance chair and former Toronto Hydro commissioner Jack Gibbons claimed that the Wynne government was a captive of the nuclear industry, and had made preserving Power Members’ Union jobs a priority over lower power bills for consumers. Without special insight into the inner workings of the Wynne cabinet and the Ministry of Energy, we can’t tell if this allegation is true or not.

The GA now constitutes the bulk of electricity bills in Ontario, making our fairly competitive kWh rate somewhat irrelevant. In 2013, for instance, the average hourly price was about 2.5¢/kWh, and the GA was about 6¢/kWh. In 2015, it had gone up to an average of 8¢/kWh. For every $100 on your electricity bills that year, $77 went to the GA.

The actual fair market rate for power in Ontario, the Hourly Ontario Energy Price or HOEP, is set by the Independent Electricity System Operator (IESO), which manages Ontario’s electrical system. The IESO is a not-for-profit corporate entity that was established in 1998 by the Electricity Act of Ontario, and is governed by an independent board whose Chair and Directors are appointed by the Government of Ontario. As its name implies, it operates independently of all other actors in the electricity market.

To determine prices, the IESO issues a forecast of the energy it believes will be consumed on that day and up to a month ahead of time including a reserve of 1,400 MW above actual consumption. These forecasts are continually updated when new information becomes available, such as hotter-than-predicted weather (which means a greater demand from air conditioners). The forecast demand is posted online so suppliers can plan their output accordingly. The forecasts are pretty accurate, with actual consumption varying no more than 2 per cent from the forecast. You can see these forecasts and demands yourself in real time on the IESO’s website.

Electricity producers review the forecast and decide how much power they are willing to offer, and at what price. They electronically submit these offers to the IESO. At the same time, a small number of large consumers bid on power, indicating their willingness to buy a certain amount of electricity at a certain price. As with an auction, if the market clearing price rises above their bid price, they decline to buy. Participation in this market is the only way to sell electricity in Ontario.

The IESO then has a figure for the power it needs to supply and a set of offers to sell power. The IESO accepts the lowest bid first, and the proceeds through incrementally higher bids until it has bought enough power to satisfy demand. The price of the last and highest offer the IESO accepts – the offer that puts it over the line to meet forecast demand – is the price paid to all accepted suppliers. The IESO then has to “dispatch,” or send notice of accepted offers. Some additional suppliers are paid “Operating Reserve” payments, which only require them to be “on call” should demand spike for some unforeseen reason. Their generating capacity will not be called upon unless needed. These prices are also determined through the market.

The HOEP is the average of the market clearing prices in the twelve auctions conducted each hour. The HOEP is the rate charged to large consumers and local distribution companies.

For example, at a particular time, let’s say the IESO has forecast that the province will need 1,000 MW (it needs far more – this is a simplified example). Three power generators make offers: Generator A offers 600MW at 10¢/KWh, B offers 400MW at 8¢/KWh, and C offers 200MW at 11¢/KWh. The IESO accepts B’s offer, as the lowest, which gives it 400MW. It then accepts A’s offer as the next-lowest, and the additional 600MW gives it the total of 1000MW it needs. It does not need C’s capacity and C’s price is higher, so it declines that offer. Both A and B are paid 10¢/KWh, since that was the price of the highest accepted offer. 10¢/KWh becomes one of the twelve market clearing prices that will be averaged over the hour to provide the HOEP. Generator D is a hydroelectric station that can quickly adjust its capacity. It isn’t needed right now, but it is paid an Operating Reserve payment for an additional 200MW in case demand spikes and additional capacity is required very quickly.

This, in short, is how electricity prices in Ontario are determined. This process, plus the Global Adjustment, taxes, and whatever miscellaneous fees may be tacked on, becomes your power bill. 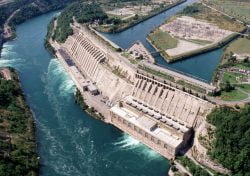 One thing that often irritates Niagarans is that we have to pay high electricity costs despite living next-door to a major power source in Niagara Falls. There are two stations at the Falls – Ontario Hydro’s Sir Adam Beck facility, with two plants, and the U.S. Robert Moses Hydro Electric Plant, built directly opposite. Both sides are tied into each other’s grids by high-voltage transmission lines.

By international agreement, the Canadian side draws 56,500 cubic feet of water per second, and the Americans draw 32,500. The Adam Beck stations generate up to 2,000 MW. Together with the Robert Moses plant, these power stations supply about a quarter of all power used in New York State and Ontario. In New York State, the Niagara Preference Power Program (NPPP) provides power to 51 municipally and/or cooperatively-owned rural electric providers in New York State.

This gives you an idea of how our electrical system works and how prices in Ontario are determined. In our next post, we will go into how prices came to be so high.