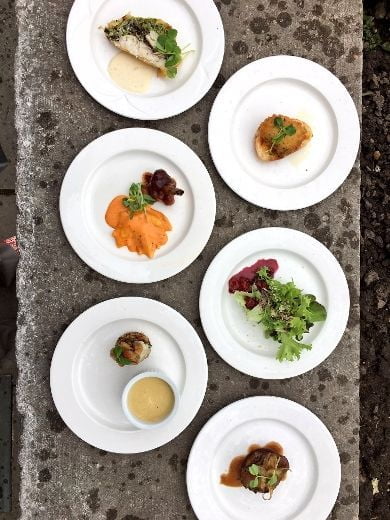 There’s a structure at the end of the Niagara Parkway in Fort Erie. It’s a big arch on an even bigger lawn, and it overlooks the spot where Lake Erie funnels into the strident Niagara River.

I found out last week it has a name — two, in fact: Mather Arch or Mather Park Gate.

For the 12-plus years I’ve lived in Niagara, Mather Arch was a nameless landmark to me. Its purpose was to simply let me know I was getting to close to my usual Fort Erie destinations of Happy Jack’s or Ming Teh Chinese restaurants.

But last week, instead of telling me dinner was just around the bend, Mather Arch was where I ate my last meal of the day. It was the site of a pop-up dinner hosted by Niagara Parks, which put the invitation out by social media to eat, drink and be schooled in history and architecture at a spot many of us have likely only driven past en route to somewhere else.

The dinner was part of Niagara Parks Commission’s Begin Here: Canada 150 at Niagara Parks celebrations. It was one of a series of meals Niagara Parks is planning in unexpected places this summer.

Stopping and smelling the roses, or on this evening the fried Lake Erie Perch, at one of its lesser known sites was partly the point of the Mather Arch pop-up, explained Ryan Moran, Niagara Parks’ senior manager of marketing. The parks commission bills its real estate along the Niagara River as a 56-kilometre outdoor museum. So it’s keen to market more than the giant cataracts down the road.

Mather Arch seemed made for an impromptu nosh, really. The tables, decked out in red and white linens for Canada’s 150th, fit perfectly under the sycamore trees along the arch’s wings. One diner — most were locals — suggested Niagara Parks set up a pavilion for weddings at my Chinese-food-this-way beacon. Others made plans to return for a picnic at this “grand gateway to Canada” built in 1940. Requests were made for more such events. 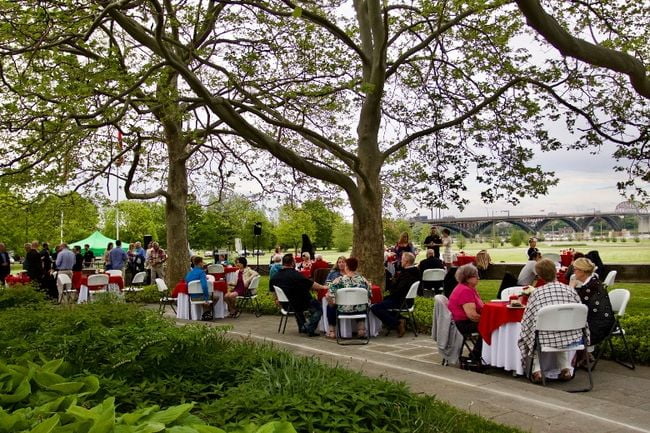 The food on our plates was equally important to the night and the parks commission’s message, too.

Niagara Parks runs one of the largest culinary apprenticeship programs in Canada. It’s also made serious efforts to improve its food programs at its five full-service restaurants.

Each location is #FeastON certified, which means it must serve a minimum 25 per cent local food and drink — and produce the bills of sale to prove it. At last count, 45 per cent of the food and 90 per cent of the beverages Niagara Parks serves are sourced locally.

“When planning our menus, we think Niagara first, Ontario second and Canada third,” executive chef Paul Pennock told the crowd. “It’s better products to showcase what we have in Niagara.”

The hope is higher quality food served with a story of provenance will beckon more than just hungry tourists to Niagara Parks tables.

“We do want to break that mould of being tourist restaurants and be one of those players showcasing the tastes of Niagara,” Moran said.

As such, the parks commission is becoming more than just a landlord in the communities through which it cuts a swath. It’s becoming an active supporter.

At the Mather Arch dinner, it smartly featured beer from Brimstone Brewing Co. in Ridgeway. Lake Erie pickerel and perch were both on the menu, served on small plates at tasting stations set up on the steps of Mather Arch. Aside from beer, dinner could be washed down with loganberry fruit punch or Niagara VQA wine.

Sugar waffles by Crystal Beach Candy Co. topped with crumbled Hall’s Original Suckers were the sweet finish and, like the punch, harkened back to the glory days of the Crystal Beach Amusement Park.

“We’re not divorced from the communities we’re in,” Moran said about featuring truly Fort Erie fare on the menu. “The stronger everyone is in the region, the stronger we are as well.”

At least three more pop-up dinners are in the works for this summer. Niagara Glen will host in July, Queenston Heights in August and Oakes Garden Theatre near the foot of Clifton Hill is being eyed for September’s supper club setting.

Details and ticket sales will be announced using social media. Tickets will go on sale three to four weeks prior to each dinner, Moran said.

“The idea of being a pop-up is to try to do it in that spirit as well … and make it a surprise event.”

— Tiffany Mayer is the author of Niagara Food: A Flavourful History of the Peninsula’s Bounty (The History Press). She also blogs about food and farming at eatingniagara.com. You can reach her at eatingniagara@gmail.com or on Twitter @eatingniagara.