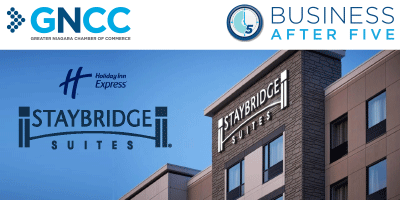 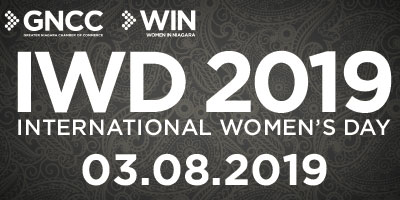 BIG things are coming in 2019 for International Women’s Day! Watch our website for the announcement of our speaker and venue.

Please join us in welcoming the new members who joined in November 2018.

On December 6, Niagara Region announced that Jim Bradley has been appointed to the position of Regional Chair by a vote of Regional Council for the 2018–2022 term. Bradley, who is the eighth Regional Chair for the Niagara Region, began his political career as a St. Catharines City Councillor from 1970–77. He served as the Member of Provincial Parliament for St. Catharines from 1977–2018.

During his time as MPP, Bradley held roles as Provincial Minister of Environment, Transportation, Municipal Affairs and Housing, Tourism and Recreation, Community Safety and Correctional Services, and Seniors. Bradley has contributed to the Niagara community as a hockey and baseball coach, manager and referee; as member of Grantham Optimist Club, as an active supporter of the Rankin Run, Gillian’s Place, Start Me Up Niagara, Community Care, Bethlehem Place and other volunteer organizations.

Stop by the venue at 4437 Queen Street, Niagara Falls from 6:00pm to 10:00pm on Wednesday, December 12 to learn how to throw an axe and enter for your chance to win a league season giveaway! No reservations required.

Join the Niagara Walk for Alzheimer’s

Join the movement! The new Walk for Alzheimer’s builds on the strength of thousands of community walks across the country. It’s a great opportunity to rally around this increasingly prevalent disease, raising awareness and much-needed funds to support local programs and services in the Niagara Region.

On Sunday, January 27, 2019, make memories matter by joining in the cause. Invite your family, friends, neighbours and co-workers too; every step you take together may be one step closer to a world without Alzheimer’s disease.

“Open Your Heart and Be Kind” is the message on the joyful holiday drawing that will be the face of Niagara Health’s 2018 Holiday Greeting Card. Alexa Kirkwood, nine-year-old daughter of Service Desk Analyst David Kirkwood at Niagara Health’s Data Centre in Thorold, is the brilliant artist behind the grand prize-winning entry of the 12th Annual Holiday Card Contest for kids.

The colourful drawing shows a nurse, an elf, along with Santa and his reindeer spreading this message of kindness. “Alexa’s drawing is meant to bring joy to sick children,” says her father David. “Her drawing is about being kind and sharing with others, especially during this holiday season.”

Fans launched more than 3,500 stuffed animals onto the ice at Meridian Centre during the annual Niagara IceDogs Teddy Bear Toss on Saturday, December 8. The stuffed animals were collected by Victim Services Niagara, in conjunction with Niagara Regional Police, to provide comfort to children throughout the region.

The plush rain happened eight and a half minutes into the first period, when IceDog Kirill Maksimov scored the first goal for the home team. The IceDogs were playing the North Bay Battalion. The IceDogs won the game 5-2.

It was another banner breakfast for Project Share on Friday, December 7, as they hosted their most successful Good News Breakfast ever. The event, hosted this year at the Greg Frewin Theatre, brought in more than $174,000 in toys, food and monetary donations.

“When we started this year, I said we wanted to get over the $160,000 marker this time, and we did it,” said Chris Russell, an organizer from Niagara Transit. By the end of the breakfast event, a city bus was stuffed to the ceiling with Christmas goodies which will be distributed around the city during the holiday season. In an average December, Project Share will distribute about 75,000 pounds of food, and provide assistance to more than 2,000 families.

Canada’s framework for interprovincial trade is patchy at best. While Canada has signed on to free-trade agreements with countries around the world, there are significant barriers to the free flow of goods and services within our own borders. Studies have suggested that these interprovincial trade constraints cost the Canadian economy up to $130 billion every year — and may negatively impact international trade relations.

Removing barriers to interprovincial trade will be the focus of a first ministers meeting in December between Prime Minister Justin Trudeau and the premiers and territorial leaders. The prime minister has flagged the issue as “a massive priority.”

Read more from the Vancouver Sun

A year ago a certification program for confirming to the public that a Canadian business has at least minimal cyber security controls was announced by CyberNB, an arm of the New Brunswick government. Since then it’s been slow getting firms and government departments certified that they have passed the Cyber Essentials Canada test and can display its logo on websites and marketing material.

On December 6, the program hopes to make a major leap by announcing a partnership with the Canadian Chamber of Commerce, which will give it greater visibility to 200,000 businesses who are members of the 450 chambers and boards of trade across the country. As an incentive, those members will get a 25 per cent discount on the certification fee they have to pay to be tested.

Read more from IT World Canada

Announcing a Drive to Cut Red Tape Wins Applause, But Doing it is a Thankless Task

In political terms, Scott Brison is often the minister of thankless tasks. The President of the Treasury Board handles internal government rules and processes, cost controls and contract negotiations with public servants. Now Mr. Brison is taking on one of those things governments have launched over and over again: a deregulation drive.

On December 5, Mr. Brison and Intergovernmental Affairs Minister Dominic Leblanc were at a union hall to call for provinces to harmonize building codes and to announce the federal government is doing things such as modernizing meat inspection rules and standardizing what can be called vodka in Canada.

Read more opinion from The Globe and Mail