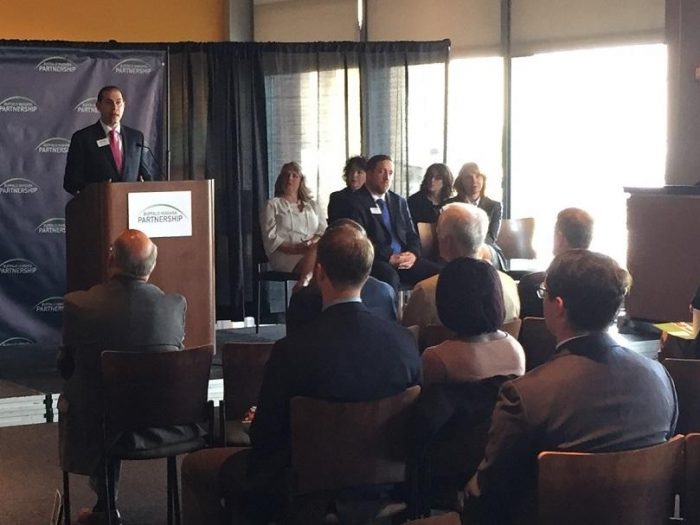 Grant Loomis, Vice President of Government Affairs for the Buffalo Niagara Partnership, speaks Thursday morning inside the Lexus Club at KeyBank Center during his organization’s release of its annual report.
– MICHAEL MROZIAK, WBFO

The Buffalo Niagara Partnership delivered its annual report to members Thursday morning, announcing an initiative to fine-tune job skill development in Western New York and a recently-formed alliance that aims to open doors on both sides of the US-Canada border.

Membership with the Partnership is up 62 percent, according to the annual report, and attendance at several annual events broke previous records.

During the membership meeting inside the Lexus Club at KeyBank Center in downtown Buffalo, guests also learned about new opportunities that will become available on both sides of the border through a recently-formed alliance with the Hamilton Chamber of Commerce and Greater Niagara Chamber of Commerce.

“My counterparts in Hamilton and Fort Erie, we talk a lot about how we can do more together,” said Partnership president and chief executive officer Dottie Gallagher-Cohen. “The only thing that separates us is the river and that pesky federal government. But we believe when we get government out of the way and we put businesses in touch with one another, the magic happens.”

The alliance would allow members of any of the chambers to eliminate the need for third parties in many cases, she explained. For example, law firms in Buffalo that work to help Canadian companies bring business into Western New York would be able to meet directly with those businesses.

The Partnership also announced two new initiatives that aim to better focus the region’s economic development, one of them by highlighting how Buffalo-Niagara ranks among peer cities in key issues. This is known as 50 Buffalo-Niagara.

“We hear a lot of talk around ‘we should be doing certain things because Chicago does it or Boston does it,'” Gallagher-Cohen said. “Putting perspective on what our economy is, is important so that we can start to make informed decisions around data.”

“We just feel it’s a good way of getting out information to the business community and elected officials to understand what the facts are.”

Gallagher-Cohen also explained the new initiative Employ Buffalo-Niagara, which calls on businesses to take a lead in workforce development and ensure local prospects are being properly developed to fill the openings companies are looking to fill.

“It means making sure we’re speaking the same language, making sure that we’re not talking generically about specific skill sets that people need,” she said. “It’s working with the education and training providers, so we’re not creating too many of one kind of person and not enough of another.”