The brave firefighters seem to have the upper hand in the 230,000-hectare wildfire near Fort McMurray. If there was any doubt about the importance of the oil and gas industry to Canada’s national economy, it can now be laid to rest. We’ve all seen the human impact in the harrowing pictures on the news, and our hearts go out to the affected people, but the economic impacts will also be severe.

Eight major oil companies, including Syncrude and Suncor, suspended operations reducing oil production by 1.2 million barrels per day. (Canada’s total oil production was 3.9 million bpd before the fires.) The loss to the oil industry is roughly $63 million a day. Even with the fire under control, it could take weeks or months to get full production back on line. Some of the equipment, such as upgraders, is not meant to be shut down because the bitumen can solidify inside the machinery.

The Government of Alberta announced that the wildfire, which covered about 1,600 square kilometres, has destroyed 2,400 buildings in Fort McMurray. This means that 85% of the city is still intact, but many businesses have been damaged or destroyed in the fire. Until these parts of the city are rebuilt, much of Fort McMurray’s economic activity will be reduced.

It’s hard to gauge the economic impact because we just don’t know the duration of the shut-downs and the speed of rebuilding. Our only comparable precedent is the much smaller fire in Slave Lake.

Also, the economic repercussions stretch well beyond Alberta. Our friends at Canadian Manufacturers and Exporters (CME) point out that there are 1,800 manufacturers in Ontario and Quebec that supply goods into the oilsands. Insurers will also be hard hit: the Bank of Montreal estimated the disaster could cost as much as $9 billion in payouts.

We were expecting that Canada’s GDP would grow at around 1.6% (annualized) in the second quarter. We now expect that GDP growth will be just 0.5%. It’s a harsh hit, and we think it’s a conservative estimate. 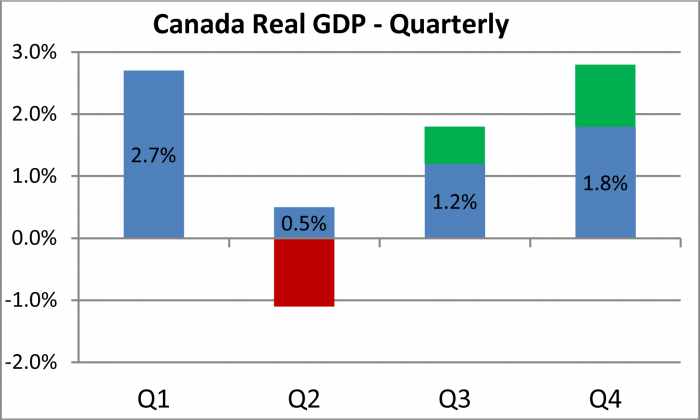 Projecting further becomes more complicated. The perverse thing about GDP is that natural disasters often boost economic growth. When a flood or fire hits, we don’t subtract the damaged assets from GDP, but all the reconstruction and rebuilding shows up as extra economic activity. That’s why we are estimating an additional 0.6% growth to Q3 and 1.0% to Q4.

This gives us overall growth in 2016 of 1.6% instead of 1.7%. This means that the worst fears about the impact from wildfires will not be realized in large part because of the courage of firefighters and the rapid response and admirable resilience of Fort McMurray’s people. If you have not already donated to the Alberta Chambers Relief Fund, please do so here.