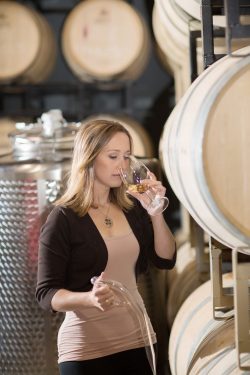 Emma Garner, a graduate of Brock University’s Oenology and Viticulture (OEVI) program, is among the numerous female scientists making a mark in the booming grape and wine industry.

As International Women’s Day (March 8) pushes for greater gender equality across the sciences, there’s at least one facet of the STEM sector where women are beginning to outnumber men.

They may be underrepresented in some science, technology, engineering, mathematics and computer science (STEM) disciplines, but women have been steadily increasing their numbers in the fields of winemaking and grape growing.

At Brock, the pattern of women graduating from the OEVI program is likely to continue in the future as just over 60 per cent of current students in the program are women.

Brock alumna Emma Garner (BSc, ’04), currently one of four winemakers at Thirty Bench winery in Beamsville, is one example of a female graduate who has found career success in the industry since completing the program.

Garner, who was last year’s Ontario Winemaker of the Year, said the industry has historically had a greater focus on men.

“However, in recent years there has been a swing towards showcasing women. And there are so many fantastic female producers — winemakers, owners, promoters — working in all aspects of the industry and making substantial contributions.”

This shift has also been noticed by Debbie Inglis, the Director of Brock’s Cool Climate Oenology and Viticulture Institute (CCOVI).

Within CCIOVI itself, seven of nine full-time staff members are female, as are many of the flagship research institute’s researchers and research assistants. And all of the graduate students currently working with Inglis this year are also female.

She said maintaining diversity is key to remaining competitive in such a demanding and innovative industry.

“As more women continue with careers in science, they act as mentors and role models for the next generation, stimulating even more interest in these career options for young women peering into the future,” said Inglis. “It is very rewarding to see the valued contribution that women are making in the grape and wine industry, from winemakers to vineyard operations to research positions.”

“Every time I encounter another woman who is trying to work in this industry — which is so intense — as well as balance a healthy lifestyle, care for a family and herself, I am inspired.”