The federal government plans to drop the COVID-19 vaccine requirement for people who enter Canada by the end of September, the same day it ends random testing of arrivals and makes optional the ArriveCan app, The Globe and Mail has learned.
The changes, for arrivals at land, air and sea ports of entry, are planned for Sept. 30, but have yet to be finalized by cabinet, according to four sources The Globe is not naming because they are not authorized to speak publicly on the matter.
The mask requirement for people on trains and planes will remain in place, at the direction of Health Minister Jean-Yves Duclos, according to two of the sources.

Disclosure: The GNCC is currently lobbying for the removal of all post-COVID border measures and the ArriveCAN app. 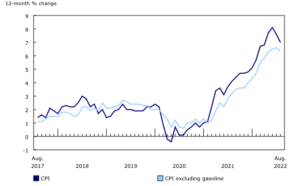 In August, the Consumer Price Index (CPI) rose 7.0% on a year-over-year basis, down from a 7.6% gain in July. This was the second consecutive slowdown in the year-over-year price growth and was largely driven by lower gasoline prices in August compared with July.

Today, the government introduced its first two pieces of legislation for this Parliamentary sitting. Bill C-30, the Cost of Living Relief Act, No. 1 (Targeted Tax Relief), would double the Goods and Services Tax Credit for six months. This would provide $2.5 billion in additional targeted support to the roughly 11 million individuals and families who already receive the tax credit.

Bill C-31, the Cost of Living Relief Act, No. 2 (Targeted Support for Households), would enact two important measures: the Canada Dental Benefit and a one-time top-up to the Canada Housing Benefit.

The Canada Dental Benefit would be provided to children under 12 who do not have access to dental insurance, starting this year. Direct payments totalling up to $1,300 per child over the next two years (up to $650 per year) would be provided for dental care services.

The one-time top-up to the Canada Housing Benefit would deliver a $500 payment to 1.8 million renters who are struggling with the cost of housing.

Reacting to pressure in the labour market, average offered hourly wages increased 5.3% to $24.05 in the second quarter on a year-over-year basis. Across broad occupations, the highest offered wage growth rates were observed in the service representatives and other customer and personal services occupations (+12.0% to $17.75); professional occupations in natural and applied sciences (+10.6% to $42.85); and occupations in front-line public protection services (+9.7% to $30.40) (not seasonally adjusted).

Groups representing hundreds of thousands of public sector employees are challenging the constitutionality of Bill 124, a law passed in 2019 that limits wage increases at one per cent per year for Ontario Public Service employees as well as broader public sector workers.

The case began last week and has heard from unions representing government workers, teachers, nurses and university faculty among others.

Bank of Canada ‘miles from being out of the woods’ even as inflation eases: BMO

Canadian inflation eased in August amid a decline in gasoline prices, but economists are warning there’s a long way to go to get price pressures back to the Bank of Canada’s (BoC) two per cent target.

While headline inflation came in at seven per cent year-over-year in August – below the 7.3 per cent increase economists tracked on the Bloomberg terminal expected – that remains more than triple the Bank of Canada’s target rate, squeezing consumer budgets.

Posthaste: Why the Bank of Canada might not hike as high as many fear

A “hawkish” statement from the Bank of Canada this month and an inflation shock in the United States has pushed many investors and economists to hike their rate forecasts.

The surprise strength of the U.S. core consumer price index last week roiled markets and pushed up expectations for the U.S. Federal Reserve’s rate to hit almost 4.5 per cent by next April.

Markets are now betting the Bank of Canada will hike its policy rate to a peak of 4.1 per cent by next March, about 50 basis points higher than a month ago, said Paul Ashworth, Capital Economics’ chief North America economist.