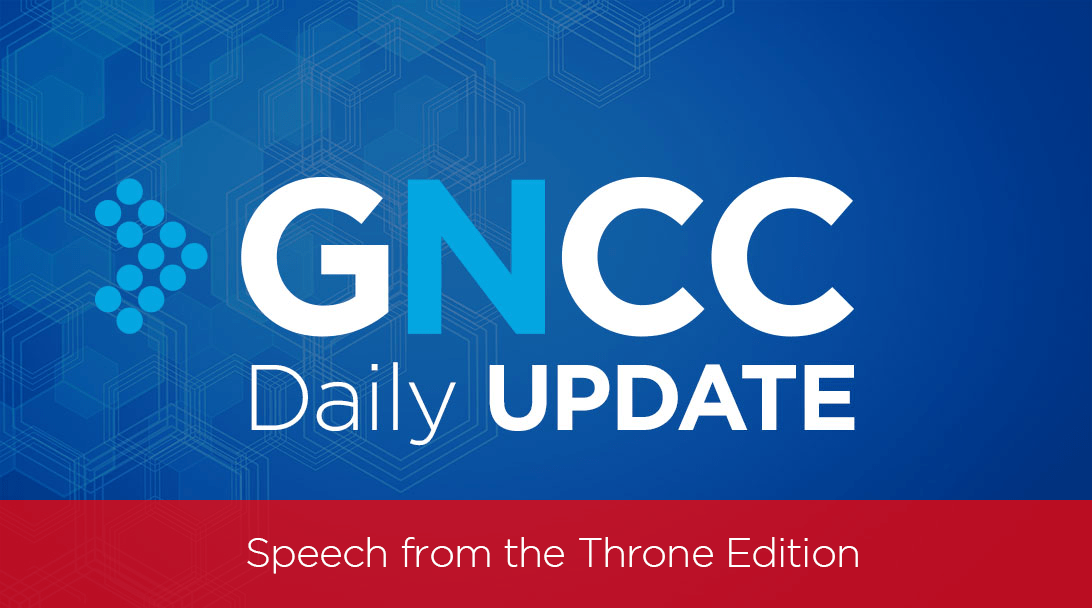 The 44th Parliament of Canada opened with a throne speech highlighting the need for a resilient economy and more action on climate change.

Speech from the Throne focuses on reconciliation, climate, inflation, housing

The 44th Parliament of Canada opened with a throne speech that highlighted the need for a more resilient economy, and a cleaner and healthier future for children. The speech is delivered to Parliament by the Queen’s representative, which is prepared by the cabinet and sets out the legislative priorities for the incoming government. It is known as the Speech from the Throne as, in previous eras when monarchs exercised direct power, it was a speech in which the reigning monarch would outline their expectations from their government. In constitutional monarchies such as Canada, the monarch currently has no input into the speech.

Highlights of the 2021 speech include:

Speech from the Throne: news roundup

The CBC reports that the government is on “reasonably solid ground politically” after the September election. Although significant economic challenges remain, government funding has helped boost household savings.

The CBC noted that the Canada Recovery Hiring Program extension would likely be a priority, as would additional support for the arts and cultural sector. The government is also expected to propose legislation that would require all federally-regulated workers to have 10 days of paid sick leave. This move will be supported by the NDP, said leader Jagmeet Singh, as would the conversion therapy ban and new protections for health care workers, potentially including criminalizing protests at hospitals and health care facilities.

The Post focused on Trudeau’s promises over climate change, child care, and truth and reconciliation. They called the speech “short on details,” but said that the government would “likely win support for its environmental and social policies from the left-leaning New Democratic Party, the main opposition Conservatives are railing against the price tag attached.”

The Post commented on the size of the deficit, noting the government’s “record-smashing deficit” of more than $300 billion in the last fiscal year, with promises of an additional $78 billion in spending above the $140 billion slated in April, but observed that “the Liberals aren’t dialling back their ambitions.”

Global opined that the speech was “a political vision that is likely to find broad progressive support in the Liberal-led minority Parliament.”

The speech highlighted major issues of concern for both the opposition New Democrats and Bloc Quebecois – the two parties most likely to vote with the Liberals on shared policy priorities like fighting climate change, increasing affordable housing stock, strengthening official language legislation and following through on more affordable child care.

However, it was noted that there were still gaps for progressives in the speech, such as a lack of reference to a national pharmacare program. The Liberals are re-emphasizing their planned ban on conversion therapy, as well as their pledge to bring in “strengthened” gun control legislation, which Global News has termed “landmines” for the Conservative Party of Canada, which struggled to address them in the last election campaign.

The Star observed that, while the first two Liberal terms were dominated by events – first the election of Donald Trump as President of the United States, and then the global COVID-19 pandemic – this speech showed that Trudeau had learned that the government could do big things fast when it wanted to, and planned to apply that principle.

The Star found “few specifics” in the speech, but noted action plans for missing and murdered Indigenous women, handgun bans, anti-racism, and others. Commenting on rumours that the Liberal Party and the NDP had been in talks for mutual support, the Star noted the NDP denial of such talks and Singh’s statement that he was ready to work with the government but had offered no guarantees.

The Globe and Mail

The Globe chose to highlight the climate change alarms sounded in the speech, pulling a quote that remarked “the Earth is in danger” for its headline. They observed that the late start to this Parliament left only a four-week window to move key bills through the House, a process that could be frustrated by the government’s minority status and the need to win support from opposition parties. That support would likely be forthcoming from the NDP, the Globe said, but cautioned that the Conservatives were opposed to Liberal spending and stimulus plans, and would want pandemic programs to be ended.

The current affairs magazine called the speech “very cautious,” and called it a collection of “warmed-over election promises” in a fairly negative review. While the language surrounding the climate issue was urgent, but the promises made were from the campaign, and despite calling the pandemic “priority number one,” there was only one new promise – a “vague assertion” of industry support.

The article commented that the lofty ideals in foreign policy were matched with “little substance,” containing no mention of the United States or China, for instance. Although throne speeches usually contain few foreign policy specifics, Maclena’s concluded that “there’s squat on this government’s vision for where Canada sits in the world.”

Clinics are available in:

Starting today (Nov. 23), appointments can be booked either online through the provincial portal at Ontario.ca/bookvaccine or by calling the provincial booking system at 1-833-943-3900.

Vaccination is one of the most effective ways to help protect ourselves, and our families and communities against COVID-19. Learn more here.

Canada’s warehouses are filling up with everything from furniture to alcohol, after floods in British Columbia washed out critical rail and road lines, disrupting already strained supply chains.

A week after a phenomenon known as an atmospheric river brought a month’s worth of rain in two days to the Pacific coast province, road traffic between Vancouver’s port, Canada’s busiest, and the rest of the country remains largely suspended.

Canadian Pacific Railway is set to restart service on Tuesday, while Canadian National Railway plans to reopen to limited traffic on Wednesday.

Shippers, meanwhile, are seeking extra storage space and eyeing alternative routes to move key manufacturing components. The disruptions come ahead of the busy holiday shopping season, with the Retail Council of Canada estimating a “significant” hit to companies.

t’s time for business, political and organizational leaders to give up on “management.”

Workers today don’t want to be managed, even benevolently. They want to be partners in co-creation, where all members are empowered to bring their whole selves to the organization regardless of hierarchies.

Consequently, those uncomfortably perched atop organizational hierarchies are faced with a stark choice: Co-create or manage, because you cannot do both.

As businesses start to envision a post-pandemic world, they are faced with unprecedented challenges, like the so-called Great Resignation that involves millions of employees opting to quit their unfulfilling jobs, and political pressures to “build back better.” As I argue in my recent book, Connected Capitalism, we need to move away from an emphasis on “management” and towards a focus on co-creation.