This significant investment is part of the 2021 Budget, Ontario’s Action Plan: Protecting People’s Health & Our Economy, and will support the province’s tourism industry as it recovers from the impacts of COVID-19. Total support from the Ontario government for the tourism, culture, sports, recreation, and heritage industries since the start of the pandemic now totals $625 million.

The Ontario Tourism and Hospitality Small Business Support Grant will provide an estimated $100 million in one-time payments of $10,000 to $20,000 to eligible small businesses including hotels, motels, travel agencies, amusement and water parks, hunting and fishing camps, and recreational and vacation camps including children’s overnight summer camps. Businesses must demonstrate they have experienced a minimum 20 per cent revenue decline and have less than 100 employees to qualify. Any small businesses that received the Ontario Small Business Support Grant will not be eligible for this new grant.

The Ontario government is moving Middlesex-London Health Unit to the Red-Control level in the Keeping Ontario Safe and Open Framework. Based on the latest assessment of data, Middlesex-London Health Unit is being moved from its current level in the Framework to the Red-Control level effective Tuesday, March 30, 2021 at 12:01 a.m. From March 22 to 28, 2021, the region’s case rate increased by 86.9 per cent, to 64.4 cases per 100,000 people. The public health region is also reporting an increase in cases screened as variants of concern.

Niagara’s Economic Rapid Response Team (ERRT) is taking a data-driven approach to Niagara’s economic recovery from COVID-19, and is asking businesses to help inform that process through a brief online survey.
The survey is open to all Niagara businesses, regardless of size, sector or community. Businesses can access the survey online.
The survey closes on Friday, April 16 and should take approximately 10 minutes to complete. It follows two previous business impact surveys conducted in 2020. Those surveys were instrumental in securing millions of dollars in pandemic relief for Niagara businesses. The team has also created an up-to-date website that offers the latest updates and resources to support businesses through the pandemic, available at ERRT.niagararegion.ca.

The Ontario government is investing $10 million in auto parts companies through the Ontario Automotive Modernization Program (O-AMP) to boost competitiveness and position Ontario as a North American hub for building the car of the future. Funding awarded so far will leverage $25.8 million in industry investments.

O-AMP was launched in September 2019 as a centrepiece of Driving Prosperity: The Future of Ontario’s Automotive Sector, the government’s plan for a strong and sustainable auto industry. The program is helping small- and medium-sized automotive parts suppliers get better, stronger and faster by investing in technology adoption and/or training in lean manufacturing. More than 100 projects are either underway or in the pipeline and will create about 570 jobs. 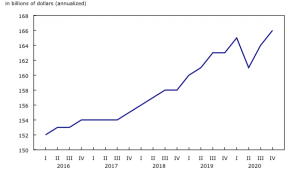 In the fourth quarter of 2020, real GDP of non-profit institutions serving governments rose 0.9%—a 16th consecutive quarterly increase. Health care and education within non-profit institutions serving governments continued to operate throughout the year, as services were re-allocated and often migrated virtually to continue serving individuals. These continued services resulted in a 3.5% increase in real GDP for 2020 relative to 2019.

Non-profit institutions serving households, such as grant-making and giving services, arts and recreation groups, and religious organizations, recorded higher levels of real GDP in the fourth quarter, up 3.2%, following a 6.3% increase in the third quarter. Despite the increase in the second half of 2020, levels remained lower than pre-pandemic highs, as cultural and recreational organizations and religious organizations were temporarily unable to operate in-person services throughout the pandemic.

For social service non-profit institutions, employment rose 11.7% in the fourth quarter, following a 33.2% increase in the third quarter. In 2020, the level of employment fell 0.6% on average, mainly owing to a 40% decline in the second quarter.

Health Canada has previously communicated on its ongoing assessment of very rare adverse events reported in Europe of thrombosis (blood clots) with thrombocytopenia (low blood platelets) occurring after immunization with the AstraZeneca vaccine. The product information was recently updated to reflect this information.

In light of this evolving information, Health Canada will be issuing additional terms and conditions on the authorizations of the AstraZeneca and Verity Pharmaceuticals/Serum Institute of India vaccines. These will include a requirement that the manufacturers conduct a detailed assessment of the benefits and risks of the vaccine by age and sex in the Canadian context. This information will support the ongoing evaluation of these rare blood clotting events, and allow Health Canada to determine if there are specific groups of people who may be at higher risk. Health Canada has been in discussions with AstraZeneca on this evolving issue.

Neighbouring Haldimand County will be provided with up to $4,570,000 in provincial disaster recovery funding, which could be used to help repair roads, bridges, drainage infrastructure and damage along the shoreline. This financial support is being provided through the Municipal Disaster Recovery Assistance (MDRA) program.

The planet had already warmed by around 1.2C since pre-industrial times when the World Health Organization officially declared a pandemic on 11 March 2020. This began a sudden and unprecedented drop in human activity, as much of the world went into lockdown and factories stopped operating, cars kept their engines off and planes were grounded.

There have been many monumental changes since then, but for those of us who work as climate scientists this period has also brought some entirely new and sometimes unexpected insights.

Less than a week after Conservative Party members defeated a motion to acknowledge the reality of climate change in its official policy, Canada’s Supreme Court reminded Canadians that climate change threatens the future of humanity and cannot be ignored.

The court ruled on March 25 that the Liberal government’s carbon pricing plan is constitutional, giving it the go ahead to make sure that each province sets a minimum price on carbon — a key part of the national effort to address climate change.

The carbon pricing law, Greenhouse Gas Pollution Pricing Act, came into force in 2018 and is a central pillar in the federal government’s climate change strategy. But several provinces — including Alberta, Ontario and Saskatchewan — have been staunch opponents of carbon pricing, arguing that the control of natural resources, including the regulation of greenhouse emissions, belongs solely to the provinces.

In its 6-3 ruling, the Supreme Court held that climate change was a matter of national concern that justified Parliament’s authority to enact laws under the Constitution’s “peace, order and good government” clause, known as POGG.