Ontario has announced a phased approach to lifting public health measures, with 21 days between each step.

Government of Ontario to begin reopening businesses from January 31st

In the absence of concerning trends in public health and health care indicators, Ontario will follow a cautious and phased approach to lifting public health measures, with 21 days between each step. 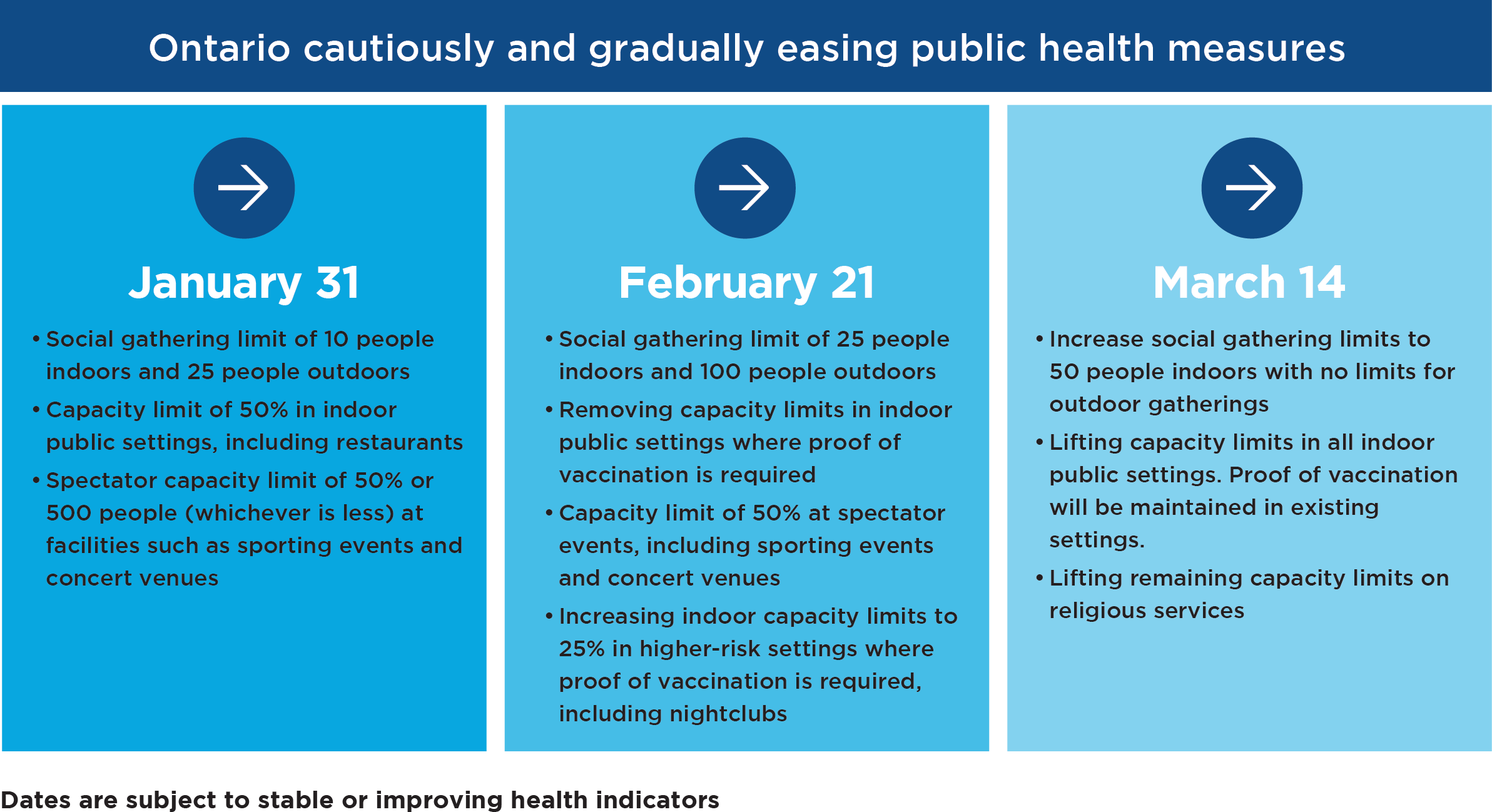 “News of a gradual reopening is welcome to businesses that have spent almost two years in and out of restrictions that have eaten up savings, added to debt, and, in some cases, led to closures,” said Mishka Balsom, CEO of the GNCC. “The announcement of these goals well in advance of their anticipated dates is similarly appreciated.”

However, the government’s announcement left businesses and the public in the dark about what public health measurements had indicated these changes were safe to make. Unlike earlier provincial reopening plans, we do not know what the government is measuring to make these decisions.

Longer-term reopening plans have been announced before, but the SARS-CoV-2 virus has derailed such plans in the past.

Due to the massive impact of the Omicron variant, testing and contact tracing have been severely curtailed or even stopped. The data we do have on the spread of COVID-19 is now considerably less reliable than it was a few months ago.

“Without knowing the data and the reasoning behind the government’s decisions,” said Balsom, “the public has little reason to be confident in this timeline and little ability to prepare for potential setbacks.”

Because of both a lack of data and a lack of transparency in the decision-making process, we cannot know what changes in public health might lead to this timetable being either accelerated or delayed. There was also no mention of a new “circuit breaker” where a sudden decline in public health metrics could trigger a new lockdown. What the Government of Ontario would consider an emergency, and what it would do in case of that emergency, remains a mystery.

“While this plan is a welcome step in the right direction,” said Balsom, “the Government of Ontario should be fully transparent about its decision-making process, and must reinvest in testing and tracing so that we can be sure to gather the data we need to make informed decisions in the future.”

The shorter work week: An idea whose time has finally come

At a time when pandemic-related positives of any sort are hard to find, it was good to see that some Ontario employers have been responding by bringing in a four-day work week. A number of these initiatives were chronicled in a recent CBC News article.

One such employer is Heather Payne, founder and CEO of Juno College, a Toronto vocational school. Over the next few months, Payne’s employees will be transitioning to a four-day week, while continuing to be paid for five days. The purpose of the change is to “boost productivity, prioritize workers’ health, and … retain talent.”

Welcome as this development is, one has to wonder why the message has taken so long to get through. To say the issue isn’t new is to understate. I, for one, was actively researching it through the 1990s.

This week’s inflation numbers have ruptured the Bay Street consensus on when the Bank of Canada will next raise interest rates.

Bank of Nova Scotia’s forecasting team, led by chief economist Jean-François Perrault, predicts a quarter-point liftoff next week when the central bank releases its next quarterly report on the economy. Perrault thinks inflation, which accelerated to its fastest pace in more than 30 years in December , will force the central bank to raise its benchmark rate to two per cent by the end of the year from 0.25 per cent currently.

hat would be aggressive, especially considering the world still is learning to cope with a pandemic, other economists said. An interest-rate increase next week could bruise the central bank’s credibility, given it signalled last fall that it wouldn’t alter borrowing costs before the spring, said Jimmy Jean, chief economist at Desjardins, the Montreal-based co-operative.