Today, the Ontario government announced a new program with up to $40 million in funding for advanced manufacturers.

Today, the Ontario government launched the Advanced Manufacturing and Innovation Competitiveness (AMIC) program. As part of the 2021 Fall Economic Statement, AMIC is a new stream of the Regional Development Program (RDP). The two-year, $40 million program will support advanced manufacturing businesses.

Beginning today, eligible businesses can apply for the new program. Eligibility requirements include:

The first round of applications will be open until February 10, 2022. Click here for more information. 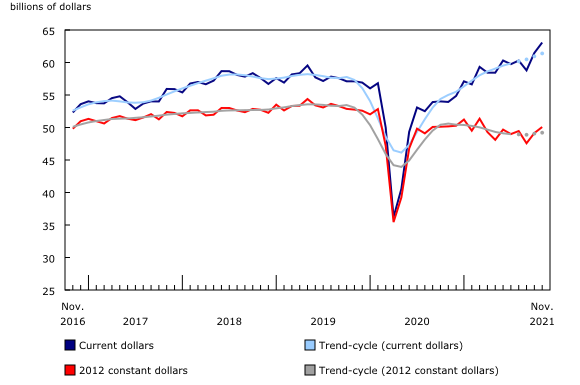 Manufacturing sales rose for a second consecutive month in November, rising 2.6% to $63.1 billion on higher sales in 18 of 21 industries, led by the primary metal, petroleum and coal product, non-metallic mineral, and food product industries.

Despite the gains observed for November, supply chain issues continued to impact manufacturing production in many industries including transportation, chemical, and food. Moreover, floods in British Columbia further exacerbated the situation.

Bank of Canada: many Canadians believe inflation will last at least two years

In the Canadian Survey of Consumer Expectations for Q4 2021, the Bank of Canada found that many Canadians think inflation will be high over the next two years because of supply disruptions caused by the pandemic. They are more concerned about inflation now than they were before the pandemic and believe it has become more difficult to control.

Although consumers anticipate significant price increases in the near term, they believe their wage increases will be relatively stable.

The Bank’s Q4 Business Outlook Survey found that a broadening set of firms saw a solid recovery in sales supported by strengthening domestic and foreign demand. At the same time, more firms reported impacts from labour shortages and supply chain disruptions, including a continued drag on their sales. Reports of capacity pressures were widespread.

In response to capacity pressures, most businesses across sectors and regions are set to increase investment and plan to raise wages to compete for workers and retain staff. Many firms also expect selling prices to rise in the next six months because of supply constraints.

The Bank noted that both surveys took place before the recent surge in Omicron cases, which may mean that these results are no longer accurate.

The Government of Canada has received an initial shipment of 30,400 treatment courses of Pfizer’s COVID-19 oral antiviral treatment, PAXLOVIDTM, with 120,000 more expected to be delivered between now and the end of March. Canada has secured 1 million courses of the treatment in total. The treatment received Health Canada regulatory authorization earlier today. Distribution to provinces and territories will begin imminently.

Antigen tests are viral tests that check for the presence of SARS-CoV-2 viral proteins in a sample from a person’s nose or mouth to help determine if the person is currently infected with the coronavirus.

Sometimes known as lateral flow tests or lateral flow devices, rapid antigen tests for COVID-19 are similar to pregnancy tests in that they detect proteins in a specimen using antibodies embedded in a test strip. Typically, COVID-19 rapid tests use antibodies that recognize parts of the nucleocapsid, or N, protein of SARS-CoV-2 because more of that protein is made and because it’s less likely to change over time as the virus mutates.

Antigen tests are generally reliable, but they aren’t as sensitive as molecular diagnostic tests, such as polymerase chain reaction, or PCR, tests. Compared with those tests, antigen tests are more likely to fail to register a coronavirus infection, resulting in a false negative reading.

To a lesser extent, antigen tests are also less specific than molecular tests, incorrectly flagging some people as being positive when they aren’t infected, and showing what’s known as a false positive. These performance features, however, are expected — and are a trade-off for having a test that can return a result in minutes rather than hours or days.

Collectively, this means that a positive result on an antigen test is very likely to be correct, but a negative test doesn’t necessarily mean someone is in the clear.

Canada’s largest airlines and its busiest airport asked the federal government Monday to drop its rule requiring vaccinated travellers to test on arrival for COVID-19.

In a letter to Ottawa and the Ontario government, Air Canada, WestJet and Toronto’s Pearson International Airport called for a shift of testing capacity from airports to the community.

“As the government has ramped up testing at airports for international arrivals, we have seen frontline workers struggle to get PCR tests, and lab processing capacity decrease significantly,” the letter said, citing schools, hospitals and long-term care homes as particular priorities.

“There is a growing discrepancy between resources allocated to asymptomatic travellers and to those who need it most.”