May 1st is Doctors’ Day, and on behalf of the business community, the GNCC offers its gratitude and appreciation to more than 600 physicians and practitioners in Niagara, to doctors who have retired from practice, and to new doctors starting to practice or coming from elsewhere. Now more than ever, we need the dedication and professionalism which they bring to their work.

On May 1, Niagara Falls will be illuminated blue from 10 to 10:15 p.m. in honour of Doctors’ Day. You can view the illumination safely from your home here. At 9 p.m., the Ontario Medical Association is asking residents to “shine a light for all they do” in a show of appreciation for physicians. The association encourages people to turn on their phone flashlights and hold them high. Ontarians are also encouraged to write a message or post pictures and videos acknowledging doctors on social media using the hashtags #DoctorsDay and #ShineALightForThem.

The government’s action to reduce and freeze tuition has provided students with tuition relief of approximately $450 million annually when compared to tuition costs in 2018-19. In addition to the freeze, the tuition framework for domestic out-of-province students will return to a system similar to the previous framework with the option for a three per cent increase in 2021-22.

Students enrolled in a university undergraduate arts and science degree will pay an average of $660 less in tuition than if the tuition reduction and freeze policy had not been put in place.

The Ontario Government is introducing its first Digital and Data Strategy, Building a Digital Ontario. This strategy includes over two dozen new and established initiatives and responds directly to the feedback received over a two-year period from more than 1,300 individuals and organizations representing over 40,000 businesses, 400 municipalities, and 10,000 professionals.. Many jurisdictions around the globe have already begun this work, and Ontario is now laying the foundation to ensure that the province is meeting and exceeding the work of other jurisdictions.

Data is one of our most valuable resources. In 2018, Canadian businesses invested approximately $40 billion in gathering, processing, and utilizing data, and the value of Canadian data assets is now estimated at over $200 billion.

The Recruitment Committee has retained Legacy Executive Search Partners, an executive recruitment firm, to aid in the search for a permanent leader. Last night, Council approved a position profile, job advertisement and core competencies for the CAO position. Developed by the CAO Recruitment Committee in consultation with Regional Councillors and senior staff, these documents capture the essential characteristics, traits, experiences, and abilities that exemplify leadership at Niagara Region, and will guide the identification and selection of candidates.

With a draft being finalized for a new Climate Adaptation Plan (CAP), the City of St. Catharines is hosting an online open house from April 30 to May 14, allowing residents the opportunity to review the plan, ask questions and provide feedback. Based on the latest climate projections, by 2050 St. Catharines will experience hotter summers; warmer and wetter winters; longer and wetter springs; and shorter falls, all driving increased extreme weather events including flooding, heat waves and intense winter storms.

For more information or to provide feedback and ask questions please visit engageSTC.ca/ClimateAdaptation.

At a Special Council meeting held on April 29, 2021, Welland City Council approved a by-law to hold a by-election (PDF link) to fill the Ward 3 vacancy left by the resignation of Lucas Spinoza. Nomination Day will be Friday, June 25, 2021, and Voting Day will be Monday, August 9, 2021. Interested candidates can schedule appointments to pick up nomination packages with the City Clerks office by emailing clerk@welland.ca or calling 905-735-1700, ext. 1000.

The number of ICU beds being filled by COVID-19 patients is at unprecedented levels and is anticipated to climb further. Over the last week, Niagara Health has increased the number of physicians and staff working in their ICUs. This has required a significant effort from Niagara Health teams and has included redeploying staff from other areas to implement a team-based model of care that expands staffing capacity.

Niagara Health asks that everyone please continue to follow public health measures including masking, physical distancing, handwashing, having contact with members of your household only and getting the first vaccine that is available to you. 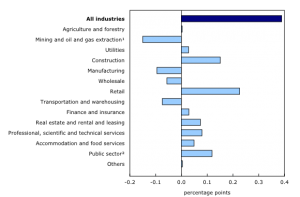 Real gross domestic product (GDP) grew 0.4% in February, Statistics Canada reports, following 0.7% growth in January. This 10th consecutive monthly increase continued to offset the steepest drops on record in Canadian economic activity observed in March and April 2020. However, total economic activity was about 2% below the level observed in February 2020, before the COVID-19 pandemic.

Retail trade activity jumped 4.5% in February, following two months of decreases, as 10 of the 12 subsectors were up. In February, many provinces lifted or eased the lockdown measures that had largely contributed to the sector’s declines in December and January. Stores more dependent on in-store traffic experienced the largest rebound in activity.

$716K is the average house price in Canada. Here’s what you can get for that

House prices are soaring, with the average national price now standing at $716,828, according to the Canadian Real Estate Association’s MLS system. That’s up 31.6 per cent in a year, the biggest annual gain on record. The prices haven’t curbed demand either; sales were up in March by 70 per cent compared to a year ago.

So what do you get for nearly three-quarters of a million dollars in Canada? CBC looked through listings on April 26 and 27 and found homes across the country whose prices sit around the national average. Some city centres had no homes for sale around $716,000. In that case, lower-priced homes were chosen.

Prime Minister Justin Trudeau said today his government is open to stricter penalties for travellers who violate the mandatory quarantine period. The PM also appeared to swat away Ontario Premier Doug Ford’s call for stronger restrictions at the land border, arguing the measures now in place are working.

“We’re always looking at doing more enforcement, at stepping up on the penalties on that, and we’ll continue to work with the provinces on that,” Trudeau told a media briefing in Ottawa today. “We know that importation through the borders is extremely low in terms of cases in the country.”

Last night, Ford’s government sent Trudeau a letter asking that quarantine measures at the country’s airports be extended to the land border with the United States.

The electric vehicle charging industry is doing everything except making money

President Joe Biden’s plan to wean U.S. drivers off fossil fuels requires massive investment in public charging stations to power the electric-car revolution. So far, none of the companies that deploy the equipment has figured out how to make a profit.

The dilemma boils down to demand, and there’s a certain chicken-and-egg quality to it. Most electric-vehicle drivers charge their cars at home, so many public charging stations get little use. But lots of people still driving gasoline-powered cars won’t consider going electric until they see charging stations widely deployed, for fear that they will run out of juice on the road.

How to think about vaccines and patents in a pandemic

With any luck, the world will be awash in covid-19 vaccines by the end of the year. For now, though, it is not, and of the billion or so doses that have been produced the vast majority have been administered in richer countries. Deaths, by contrast, are increasingly concentrated in poorer ones, like India, where only about nine in every 100 people have been jabbed, compared with 64 in America. Some governments are floating radical options to remedy the mismatch. India and South Africa, for instance, propose that members of the World Trade Organisation waive intellectual-property (IP) protections for covid-fighting technologies, including vaccines. Some in the rich world are warming to the idea; in America, ten Democratic senators recently urged President Joe Biden to back it. Drugmakers, however, warn that it would deal a crippling blow to innovation. Even though IP protections are not a big constraint on vaccine production today, the experience of covid-19 suggests that a re-examination of IP rights in the context of health emergencies is overdue.

Niagara’s most up-to-date COVID statistics, measured against the targets for the various stages of the Ontario COVID-19 Response Framework, are presented below. This does not predict government policy, but is offered to give you an idea of where Niagara is situated and how likely a relaxation (or further restrictions) may be. These data are the most recent published by Niagara Region. The Grey-Lockdown level does not have its own metrics, but is triggered when the COVID-specific measurements in a Red-Control region have continued to deteriorate.

The Province of Ontario is currently under a stay-at-home order. The COVID-19 Response Framework does not apply during this order. Click here to review the restrictions currently in place.

— : Metric has not changed since last published measurement