Today, in conjunction with President Biden’s Leaders Summit on Climate, Canada and the United States announced a new initiative to engage governments around the world in greening government operations. Leading by example, the two countries also announced they will collaborate as they each work towards the goal they share of net-zero emissions government.

As a first step in their collaborative work, the Government of Canada’s Treasury Board Secretariat and the White House Council on Environmental Quality (CEQ) are creating the first of its kind forum for countries to cooperate on greening their government operations. This initiative will enable countries around the world to share lessons learned, promote innovation and, where relevant and possible, set common greening government goals to support the work underway by countries to meet their commitments under the Paris Agreement.

Both countries agree to work together to identify a pathway to net-zero supply chains for our buildings (e.g. renewable energy, concrete, steel), and fleet (zero-emission vehicles and clean fuels).

The Niagara Peninsula Conservation Authority (NPCA) is developing a new strategic plan and invites you to get involved to help shape the next 10 years of conservation in our watershed.

This new strategic plan begins with a fresh approach towards achieving a shared vision. A representative team of staff from various departments are leading the way and working together to inform, develop, and implement the strategic planning process.

Click here to learn more and submit your input.

Pelham Farmers Market to open on May 6

he Pelham Farmers Market, an essential service provider, will operate for the first time this year on Thursday, May 6, 2021, at a limited capacity. The Market continues operation every Thursday through October 7, from 4 p.m. until dusk.

Due to the COVID-19 pandemic, the Market has again adopted regulations to keep patrons safe while visiting vendors. These regulations have been approved by Niagara Public Health and are similar to those that were in place during last year’s Market.

This year, only 13 patrons may be in the market area at any given time (excluding vendors) to ensure physical distancing can be maintained. Patrons are to adhere to one-way traffic flow around the Market from the designated entrance and exit point.

Vendors for the 2021 season have already been selected and applications are now closed. 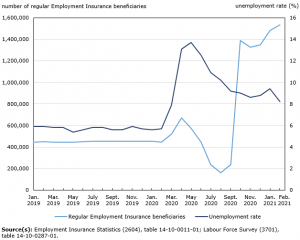 The number of Canadians receiving regular EI benefits rose 3.6% (+53,000) to 1.5 million in February, following an 11.2% increase in January. Employment increased 259,000 in February, following two months of losses, while unemployment fell to 1.7 million, including 1.4 million who were looking for work and 300,000 who had a connection to a job, either because they were on temporary layoff or had arrangements to begin a new job in the near future.

Employment remained below pre-COVID-19 levels in the industries most impacted by public health measures, including accommodation and food services (-26.1%); information, culture and recreation (-15.1%); other services (-6.0%); and retail trade (-5.4%). In February, more than one-third (38.7%) of all regular EI recipients last worked in one of these four industries, compared with 19.4% one year previously (not seasonally adjusted). 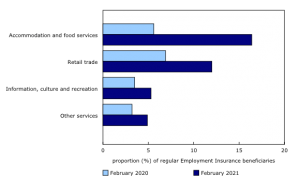 Women accounted for a larger proportion of regular EI recipients in all age groups, compared with one year previously. The increase among female youth aged 15 to 24 years, who accounted for 44.9% of all youth regular EI beneficiaries, compared with 29.9% in February 2020, was particularly notable. Results from the February LFS show that year-over-year employment losses among young women were almost double those among young men.

During today’s Leaders Summit on Climate, Prime Minister Justin Trudeau, announced that Canada will enhance our emissions reduction target under the Paris Agreement – known as a Nationally Determined Contribution (NDC) – by 40-45% below 2005 levels, by 2030. As a signatory to the Paris Agreement, Canada’s NDC reflects its highest possible ambition in light of its current national circumstances.

Going forward, Canada will continue to work closely with the United States and other countries to reach our ambitious climate goals, including through our Roadmap for a Renewed U.S.-Canada Partnership and the corresponding High Level Ministerial Dialogue on Climate Ambition.

The Ontario government will be making some sort of announcement regarding enhancements to the federal paid sick days program “in the next couple of days,” according to House Leader Paul Calandra.

Premier Doug Ford’s government has insisted for months now that it would be redundant for it to introduce its own paid sick day program while workers are eligible to receive payments through the Canada Recovery and Sickness Benefit (CRSB).

Critics, however, have said that the federal program is insufficient due to the fact that only provides sick workers with up to $500 per week and requires that they apply and go without pay until their applications are approved.

Biden eyeing capital gains tax as high as 43.4 per cent for wealthy

President Joe Biden will propose almost doubling the capital gains tax rate for wealthy individuals to 39.6 per cent, which, coupled with an existing surtax on investment income, means that federal tax rates for investors could be as high as 43.4 per cent, according to people familiar with the proposal.

The plan would boost the capital gains rate to 39.6 per cent for those earning US$1 million or more, an increase from the current base rate of 20 per cent, the people said on the condition of anonymity because the plan is not yet public. A 3.8 per cent tax on investment income that funds Obamacare would be kept in place, pushing the tax rate on returns on financial assets higher than the top rate on wage and salary income, they said.

The reasons behind the COVID spike in India (podcast)

Mass gatherings and in-person voting continue, even as new case numbers smash records and fatalities spiral in public view. We ask how a seeming pandemic success has turned so suddenly tragic. Chad’s president of three decades has been killed; that has implications for regional violence far beyond the country’s borders. And a deep dive on the international sea-cucumber trade.

Niagara’s most up-to-date COVID statistics, measured against the targets for the various stages of the Ontario COVID-19 Response Framework, are presented below. This does not predict government policy, but is offered to give you an idea of where Niagara is situated and how likely a relaxation (or further restrictions) may be. These data are the most recent published by Niagara Region. The Grey-Lockdown level does not have its own metrics, but is triggered when the COVID-specific measurements in a Red-Control region have continued to deteriorate.

The Province of Ontario is currently under a stay-at-home order. The COVID-19 Response Framework does not apply during this order. Click here to review the restrictions currently in place.

— : Metric has not changed since last published measurement