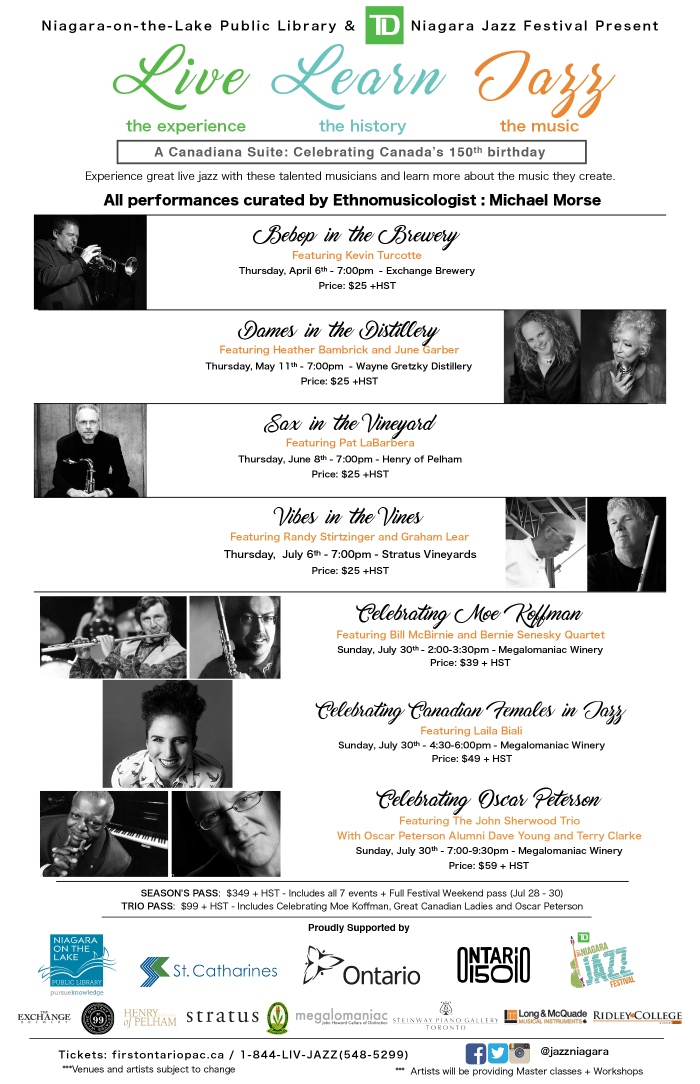 The TD Niagara Jazz Festival presents LIVE LEARN JAZZ: A Canadiana Suite Part Seven:CELEBRATING OSCAR PETERSON Featuring JOHN SHERWOOD, DAVE YOUNG and TERRY CLARKE A Canada 150 Celebration MEGALOMANIAC WINERY – 3930 Cherry Avenue, Vineland, ON – 7PM Oscar Peterson (pianist, composer, educator) was born August 15, 1925 in Montreal, and was a lifelong resident of Canada.  Regarded by many as the greatest jazz pianist in the world, his music has had a profound influence on Canadian and world jazz.  During his six decade career, he recorded over 200 albums, performed with many jazz legends as well as leading his famous trio with Ray brown and Herb Ells.His numerous awards and honours include 8 Grammy Awards including one for Lifetime Achievement, the Companion of the Order of Canada, the Order of Arts ad Letters in France, and many honorary degrees. He was also Chancellor of York University in Toronto from 1991-94.  His legacy lives on in scholarships and prizes awarded to deserving musicians, and a school named in his honour in Mississauga. Few Canadians can match his accomplishment or his recognition. Peterson died December 23, 2007 in Mississauga, Ontario.                                                     Oscar Peterson was inducted into the the Mississauga Music Walk Of Fame in September, 2003 and his star can be found in Port Credit Memorial Park.  In 2005, Canada Post issued a commemorative postage stamp in his honour. Peterson’s last public performance was at the Monterey Jazz Festival on September 16, 2007.Niagara musician John Sherwood has long been acknowledged as one of the most talented and gifted interpreters of Oscar Peterson’s music.Today Sherwood has his own sound, but Oscar Peterson’s early influence is unmistakable.  Join him at Megalomaniac’s spectacular Oscar tribute, where he will be joined by iconic Canadian jazz legends and former members of the Oscar Peterson Trio : Dave Young on bass and Terry Clarke on drums.  This is a truly unique opportunity to hear three of the very finest “Peterson” practitioners do justice to the Oscar Peterson repertoire, and his unmatched musical genius  Festival Grand Finale:  A Canadiana Suite  LIVE – the experience LEARN – the history JAZZ – the music The TD Niagara Jazz Festival is a new and exciting jazz festival dedicated to celebrating the art form of jazz in the Niagara Region. The festival inspires, educates and develops future jazz audiences for generations to come while combining live jazz with a Niagara experience – food, wine, culture and natural wonders. Tickets: $57 + HSTEarly Bird: $47 +HST

ALL TD Niagara Jazz Festival events are fully accessible as well as family friendly – appropriate for jazz lovers of all ages! ***All artists and venues subject to change. **** Supported in part by the Ontario 150 Fund (Province of Ontario) and the City of St. Catharines. *